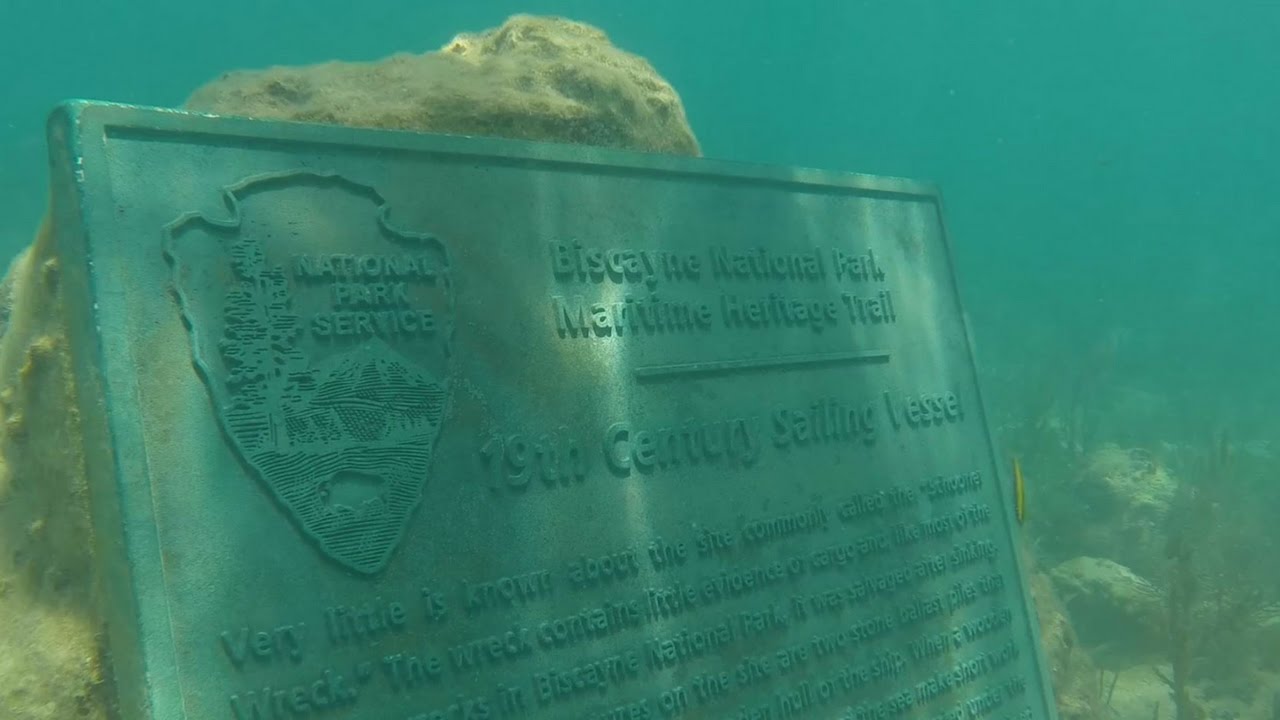 Shipwreck Diving at The Maritime Heritage Trail in Florida

Ever fancy yourself exploring sunken wrecks off a tropical island? Swimming past reefs and schools of snapper as the hull of an ancient clipper appears in the hazy blue? Now the Biscayne National Park service can make those Indiana Jones fantasies come true.

On New Year's Eve 1965, a gleaming Brigantine schooner sailed on a brisk north wind toward the lights of Miami.

Mandalay, elegant in her mahogany, brass and ivory trim, rose and fell above the waves while 23 well-heeled vacationers strolled her teak decks, the last night of a 10-day Bahamas cruise. After the partying, her passengers retired to their state-rooms. So did the skipper, Capt. Asmund Gjevick, leaving a novice seaman at the helm.

In the pre-dawn hours of the next day, the guests and crew of the Mandalay were startled awake by the sound of grating metal. The schooner's steel hull was driven onto the razor coral of Long Reef, several miles east of Elliott Key.

Rushing on deck, Gjevick realized he had miscalculated the distance from Fowey Rocks Lighthouse. The novice helmsman had no idea the schooner was 20 miles off course. The gleaming luxury vessel's steel hull was torn open; she was sinking.

Today, the skeleton of the "Red carpet ship of the Windjammer fleet" can be found submerged on Long Reef in Biscayne National Park. The coral-encrusted remains are home flurries of tropical fish.

Biscayne National Park has opened at least six sunken wrecks to visitors on a series of snorkeling tours called "The Maritime Heritage Trail."

"Mandalay looks like a shipwreck dropped into an aquarium," said park Ranger Astrid Rybeck on a recent snorkeling trip.

Along the "Maritime Heritage Trail" are shipwrecks that span nearly 100 years and include schooners and steamers.

"We know of at least 44 wrecks within the park boundary but there may be many, many more out there," said the park's official archeologist, Charles Lawson. "There may be hundreds of wrecks out there. But we've started with offering trips to see (a limited number). The tours are suitable for the novice and experienced snorkeler alike but," added Lawson, "all participants must be able to swim."

Lawson and Biscayne National Park rangers have mapped all the wrecks and laid out mooring buoys for those who want to explore on their own private vessels.

On the guided tours, a Biscayne National Park ranger will provide an overview of the park and the submerged cultural resources before leading an exploration of a selected shipwreck belonging to the Maritime Heritage Trail.

The $45 fee includes the boat ride with a ranger as well as all necessary equipment (mask, fins, snorkel and snorkel vest). Space is limited and reservations are required. Call the park's concessionaire at 305-230-1100.

All trips depart from the park's Dante Fascell Visitor Center, nine miles east of Homestead and are subject to cancellation due to weather, marine conditions and/or passenger minimums.

Bring plenty of sunscreen and mosquito repellent, or even better, long sleeves and/or other clothing items for protection from the sun and biting insects. If you take the tour in the summer months, no-see-ums and mosquitoes can get pretty bad in the parking lot and surrounding picnic areas. The briefings about the park given by the rangers are excellent – full of interesting facts about the bio-diversity. Kids are welcome and the snorkeling is well supervised.

Wrecks on the trail include:

Arratoon Apcar - Sank 1878
In the 1870s, Cape Florida Lighthouse was considered inadequate because of its distance from the reef line. When Arratoon Apcar ran aground, it did so just a few hundred yards from where workers were busy building the Fowey Rocks Lighthouse.

Alicia - Sank 1905
Alicia was laden with silks and silverware when it ran aground on Long Reef. The ensuing, often violent battles among the 70 different groups of wreckers led to a permanent rewriting of U.S. salvage laws.

Lugano - Sank 1913
At the time of its grounding, Lugano had been the largest vessel ever to wreck in the Florida Keys.

Mandalay - Sank 1966
The steel-hulled schooner Mandalay was known as the "Red Carpet Ship of the Windjammer Fleet" and was outfitted with a teak and mahogany deck.