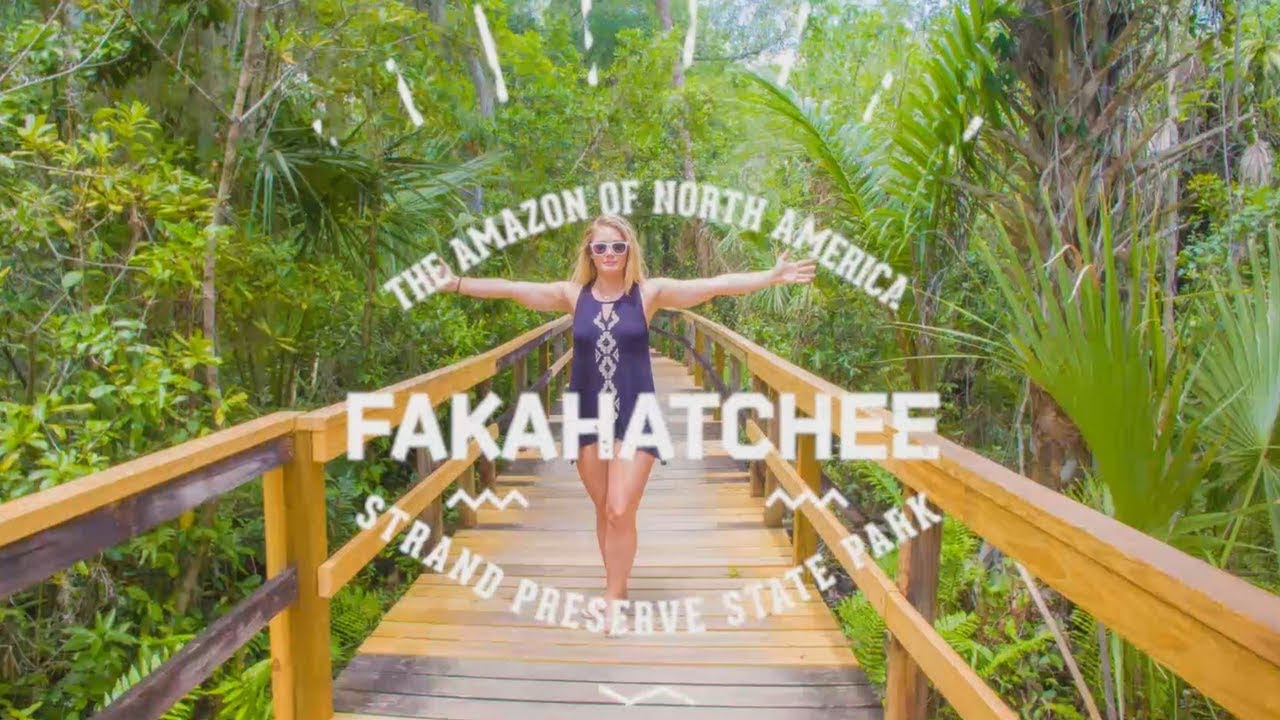 When I step off the gravel road into the Fakahatchee Strand, I always am excited -- and scared. Poking the swamp ahead of me with a walking stick, I hope I won’t encounter something toothy and reptilian.

No alligator. I creep ahead in the knee-deep water. Vines wrap around my boots and submerged cypress trunks attack my ankles. In a few places, I sink into the mud. I glance at my compass and take a bearing.

When I wade into this daunting 70,000-acre state preserve alone, I always carry an old-fashioned magnetic compass. Folks get lost here. Usually I wade in with park biologist Mike Owen, famous for his tours, or his boss Renee Rau, who fills in for Mike when he is working elsewhere.

A pair of campers overlook a pond at the Fakahatchee Strand.

A red-shouldered hawk cries from a pond apple’s highest branch. Swaying in the breeze, the trunk of a gargantuan royal palm creaks like a cathedral gate. Cronk! I have just been welcomed to the swamp church by a pig frog.

The Fakahatchee Strand, in the western Everglades, is home to some of the world’s rarest plants and animals, including things few people have ever seen. Among the world’s most famous orchids, the ghost is found in the Fakahatchee. In bloom, a ghost orchid reminds me of a dancing white fairy. When it’s not blooming in the winter, it looks like a strand of whole-wheat spaghetti. The ghost orchid was featured in Susan Orlean’s best-seller, “The Orchid Thief,” later adapted for the movie Adaptation, which starred Meryl Streep and Nicholas Cage.

Hikers walk the trail at the Fakahatchee Strand.

Mike Owens knows the exact location of 370 ghosts. He has spent more than three decades studying them and guarding them from poachers. He even wades in at night, hoping to see the ghost’s only known pollinator, the giant sphinx moth, which flits through the swamp on summer nights, filtering the air for a scent that nothing else on earth apparently can detect. Owen has never seen one.

Over the decades he has led nearly 500 hikes into the Fakahatchee Strand. Given that many folks are nervous about wading into alligator and cottonmouth water moccasin habitat, he likes to point out that he has yet to lose a visitor or even get one hurt. Nobody has been nipped by a black bear or clawed by North America’s rarest large mammal, the Florida panther, a lion that can measure seven feet from nose to tail.

Owen can’t guarantee a bear, panther or ghost orchid, but his preserve is home to 44 native orchids, including some he will point out. His most memorable tour? It happened in 2006. Among the visitors that spring morning was a brainy biologist named Donna Ann Glann-Smyth. She knew her orchids. She even spotted a few before Mike Owen did. Owen, of course, was smitten.

They invited me to their wedding in 2013. Their chapel? The Fakahatchee swamp. One guest wore a tuxedo on the special day. Another covered her beauty-parlor hairdo with mosquito netting. Donna wore a flowing white wedding dress – and wading boots. The frogs supplied the wedding march with a croaking aria. Park manager Renee Rau, an ordained minister, conducted the moving ceremony. I cried, though I can’t vouch for the snakes and gators.

Under a ghost orchid, Mike and Donna exchanged vows.

Be sure to check out additional Everglades stories by Jeff Klinkenberg:  visitflorida.com/en-us/everglades.html