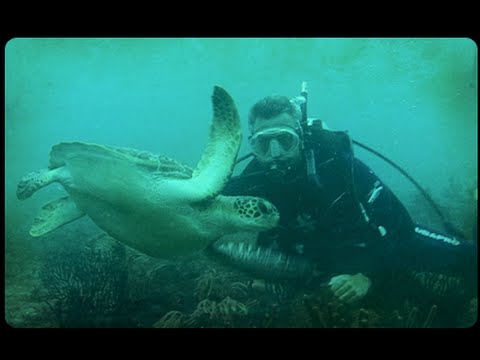 How to see nesting sea turtles

Where to See Nesting Sea Turtles in Florida

During the day, beaches are filled with sunbathers. But at night, wild Florida sea turtles weighing hundreds of pounds lumber out of the sea and onto the sands in an ancient ritual to lay their eggs. Here's how to experience it.

Visitors are often surprised to learn that more than 100,000 threatened and endangered sea turtles nest on Florida beaches every summer. In fact, nearly 90 percent of sea turtle nesting in the U.S. occurs in Florida from March through October of each year.

What’s even better is that you can see nesting sea turtles in Florida.

Up and down the Atlantic coast where sea turtle nests are most common parks and environmental groups organize nighttime sea turtle walks in June and July.

Getting a chance to see a Florida sea turtle in action takes some planning but those who’ve done it say it's a memorable experience.

On a typical turtle tour visitors are led to a spot on the beach where a sea turtle is digging a hole a foot or two deep with her hind flippers. The turtle then starts filling the nest with soft-shelled eggs the size of table tennis balls.  After laying her eggs she refills the nest with sand and heads back into the ocean. The whole process takes 30 to 60 minutes.

On turtle walks, a hushed circle of humans watches the spectacle. Two months later, the eggs hatch and scores of tiny turtles emerge from the sand at night and clamber into the water.

Florida’s most common variety of sea turtle is the loggerhead, which averages 200 to 250 pounds. Larger leatherbacks and green turtles nest here in smaller numbers but turtle walk participants are not allowed to watch them lay eggs because leatherbacks and greens are endangered and the presence of people might be disturb the nesting.

To see a sea turtle nesting on the beach you must go with a group: Turtle walk guides know the federal and state laws about what is and isn’t permissible. For example no flashlights (except for guides who must have permits) and no flash photography are allowed.

All sea-turtle walks require advance reservations. Several of the most popular sea-turtle walk locations are away from urban centers so a turtle walk might make a good anchor for a weekend getaway or beach vacation.

A leatherback sea turtle hatchling poses for a close-up.

Though much of the time you’ll see the nesting process there’s no guarantee how a season will develop. You can sign up for a walk wait for hours and see nothing but moonlight and waves. Those who are fortunate witness turtle nesting.

A mother leatherback sea turtle covers her freshly laid eggs before crawling back into the surf.

Where to experience sea turtle nesting in Florida

You can get close to a threatened or endangered species of Florida sea turtles any day of the year with a tour of The Turtle Hospital in Marathon, a non-profit rehabilitation center in the Florida Keys that rehabilitates sick and injured turtles and provides tours that allow people to see sea turtles up close. The hospital is located at 2396 Overseas Highway at mile marker 48.5 on the bay side. The phone number is 305-743-2552.

Click here for more information about where to see sea turtles in Florida.

Sea turtle nesting sites on Florida’s east and west coasts are staked out and marked with signs to protect the cache of eggs laid beneath the sand.

A female loggerhead turtle gathers her strength for the final nesting push.