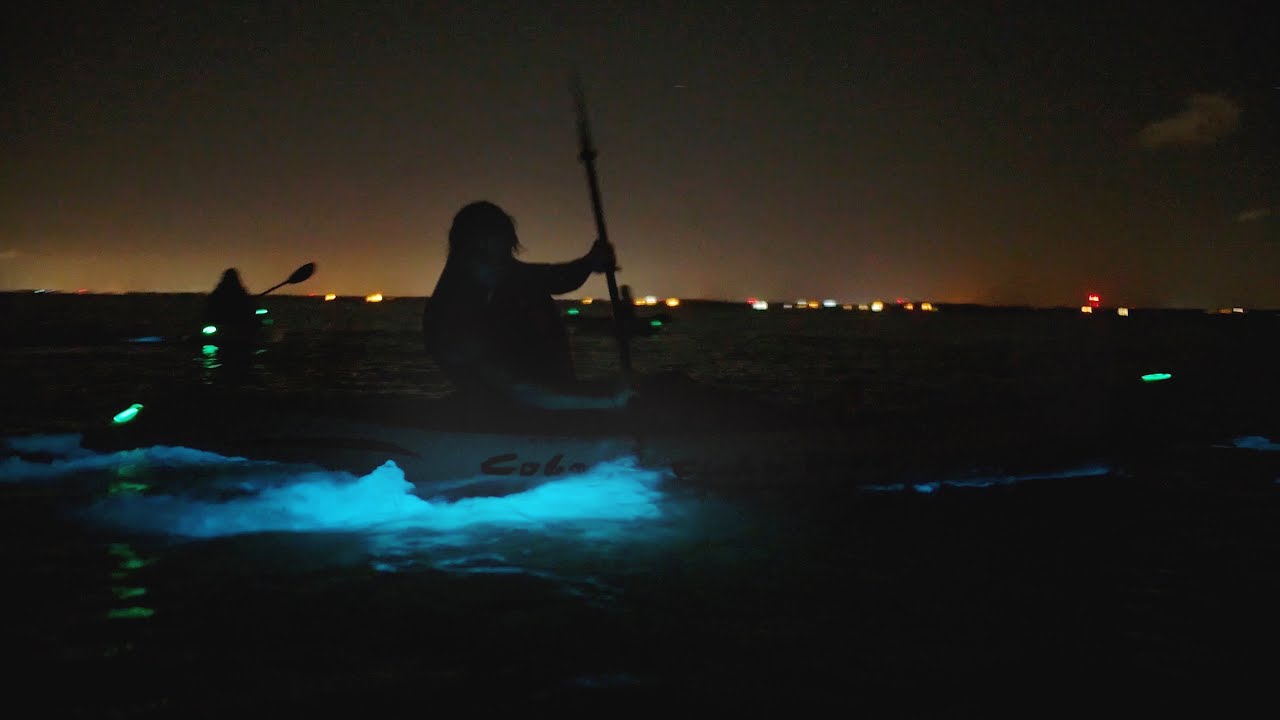 Imagine a Space Coast kayaking adventure through a fairyland of glowing blue-green water where fish, dolphins and manatees appear strangely illuminated beneath a starry sky.


Florida's northern Space Coast offers ideal conditions for bioluminescent kayaking in Florida, a peculiar natural phenomenon in which tiny, marine organisms called dinoflagelletes glow, generating cold white light through an internal chemical reaction like a firefly. The organisms are too small to see, but with some 200,000 to 300,000 in a single liter of water they can cause the water to glow the color of a fluorescent blue-green glow stick. Any movement excites the organisms and causes them to alight, from a swimming fish to swaying sea grass to the movement of your hand through the water.

"It's like a magical light show in the water. Most people walk away saying, 'I don't even know how to describe this,'" says Mike Mahan, owner of A Day Away Kayak Tours in Titusville. "When you startle a school of fish it looks like bright blue bottle rockets going off under the water."

The Space Coast is already known as a launching place into other worlds. It also features some of the best of our own. Besides the space program, nature here is the primary draw. Located on Florida's east coast near the state's midsection, the region offers some 72 miles of beaches, the state's longest stretch. It is a top surfing spot in the eastern United States. The region is also home to Canaveral National Seashore and Merritt Island National Wildlife Refuge. Canaveral National Seashore is among 10 national seashores in the United States, a rare untouched stretch of beach. Merritt Island National Wildlife Refuge consists of some 140,000 acres of saltwater estuaries and hardwood hammocks, home to 15 federally threatened or endangered species and a spectacular array of birds.

The opportunity to go bioluminescent kayaking in Florida is not unique to the northern Space Coast, but the area's lack of development means less water and light pollution, making it easier to see the strange glow of those tiny organisms. Imagine setting out along the Space Coast, kayaking in the evening to watch the sun set. Soon the sky grows dark and the only light comes from the glow below as mullet burst into the air like green popcorn.

To remain inside Merritt Island National Wildlife Refuge after dark visitors require permits, so it's best to go with a guide like Mahan, recommends Laurilee Thompson, a fifth-generation Floridian and avid outdoorswoman, who is co-owner of Dixie Crossroads, the well-known Titusville seafood restaurant.

"Dolphins will swim right next to the kayaks sometimes. So it's like this big huge green fluorescence in the water from the dolphins. Sometimes we'll see manatees, and sometimes the manatees will be way down deep, like this big glowing ghost under the water," Thompson says. "It's a lifetime experience, no doubt about it."

To plan your trip to Florida's Space Coast, visit www.visitspacecoast.com.