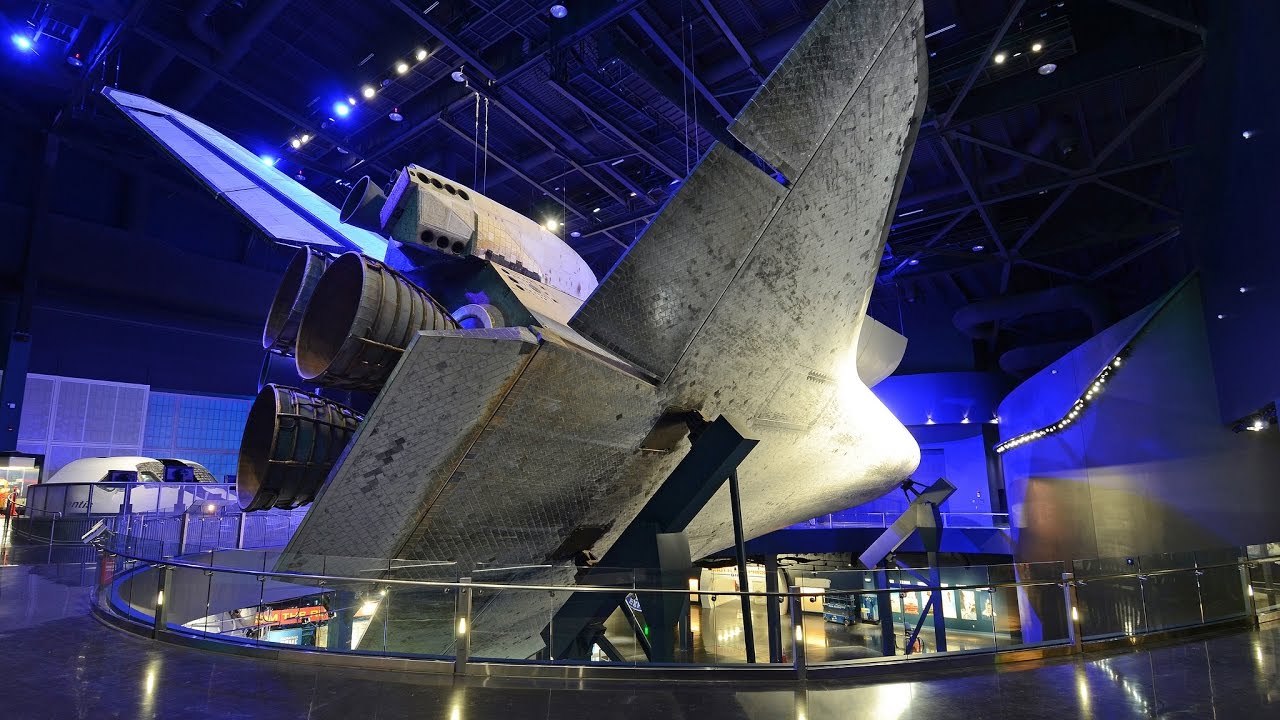 Florida has been at the epicenter of human space flight for more than half a century. From the sandy shores of Brevard County – commonly called the Space Coast – many memorable launches and milestones were logged. Space innovation is still happening there.

A film of a rotating Earth behind Space Shuttle Atlantis gives the appearance of the shuttle in orbit at the Kennedy Space Center Visitors Complex.

The Kennedy Space Center Visitors Complex opened in 1967, two years before Neil Armstrong’s historic bounce on the moon. Since then many firsts originated at Kennedy, not the least of which was the revolutionary Space Shuttle program. The visitors complex shares the experiences of historic space travel with travelers through exhibits such as the Rocket Garden and the U.S. Astronaut Hall of Fame and interactive attractions that let visitors soar in the style of astronauts. More than 1.5 million visitors board buses to tour the 140,000-square-foot complex each year, many leaving with minds blown about the scope of the American space program and its accomplishments.

Watching a launch on TV or even in person from Florida is an altogether different thrill than being dwarfed when standing next to the nearly 60-feet high Atlantis shuttle and contemplating its 4,848 orbits around Earth. A day at the visitors complex includes many inspiring encounters, but these five should not be missed.

Tour with an Astronaut Guide

Each day, an astronaut meets with general admission visitors. This is a prime opportunity to ask questions about the space experience and quite the blast for young would-be astronauts. (How do you go to the bathroom? What’s it like to live without gravity? Do you get Wi-Fi up there?)

Even more special is to tour the facility with an astronaut guide.  “Fly with an Astronaut” is a separately ticketed, regularly scheduled tour for small groups that includes lunch at the L-39 observation site where the Apollo crews set off for the moon. Participants tour the facility via motor coach with the guides, getting first-hand commentary about the shuttle experience and other aspects of space exploration. The program is 9:30 a.m. until 1:30 p.m., leaving time afterward to visit other parts of the complex before closing time (as late as 7 p.m. depending on the season). Imagine taking part in the Space Shuttle Launch Experience with someone who has an actually commanded a vehicle or been part of the scientific experiments team. An out-of-this-world adventure. Check the website for schedule.

Ride a module that fits tidily into the payload bay of a shuttle vehicle. Learn how the massive shuttle gets fueled. Prepare for what might happen in an emergency. Experience a rockin’-rollin’ liftoff. It’s awesome to be able to experience the sights, sounds and feelings of a launch without have an advanced degree in aeronautical engineering.  The Shuttle Launch Experience accomplishes this in thrilling fashion and is suitable for all ages. A video briefing by NASA astronauts, who helped develop the exhibit, gets riders ready to strap into the simulation ride. The Columbia kicked off the shuttle era with the program’s first flight on April 21, 1981, and Atlantis logged the last mission on July 8, 2011, marking the end of the nearly 30-year program. Two shuttles and their crews, Challenger and Columbia, were tragically lost during that period and they are memorialized at the visitors complex.  The reality of space travel is not sugarcoated here and taking part in the Shuttle Launch Experience is a reminder of the excitement and dangers of exploration.

You can climb into a training simulator at the Kennedy Space Center Visitors Complex.

Many young people dream of being space explorers, roaming the galaxies in weightless suspension and eating freeze-dried ice cream from pouches. It sounds romantic and adventurous, looking down on planet Earth from 250 miles or farther. But what does a prospective space traveler really have to do to make it in outer space? In Kennedy Space Center’s training simulators, visitors find out. Participants get a chance to land an orbiter and dock it at the International Space Station. And once they arrive, they have to return and the simulator guides trainees back to Kennedy Space Center where a smooth landing is the goal. They do this from the inside of Atlantis, the last space shuttle to liftoff from Kennedy.  Manipulating the “Canadarm” is also part of the experience. The mechanical arm deployed and repaired satellites and positioned astronauts for “walks” outside the vehicle. Designers have made the simulators as close to real-life training as they can, including a 21-console control panel.  This is the place to stoke the dreams of future explorers.

Located in the IMAX building, this indoor, multi-level play area invites explorers aged two to 12 to discover the wonders of outer space with immersive experiences that include sliding through an asteroid field, mapping a constellation, scaling a wormhole, and even skipping across Saturn’s vivid rings. Mom and dad can kick back in a comfortable lounge and enjoy a coffee, wine and beer bar while watching their little space cadets learn about the cosmos. Children must be supervised by a parent or adult at all times in the play area.

Where were you on July 20, 1969, the day Apollo astronaut Neil Armstrong took that historic first step from lunar module Eagle onto the the surface of the moon? That’s a common question asked of people of a certain age who usually respond with robust memories.  Those who can’t answer because they weren’t yet born, can learn the lessons of the moon missions at Kennedy Space Center. The glory days, and crushing defeats, of the Apollo missions (1961-75) are painstakingly laid out for visitors. On display are a replica of the land rover that grazed the moon and a full-scale model of Skylab. Skylab was where astronauts learned to adapt to extended life in space.  The Apollo Treasures Gallery includes space suits and astronaut John Young’s checklist on how to deploy the American flag, among other artifacts. Apollo 8 was NASA’s first crewed mission to orbit the moon and visitors relive the launch in front of the actual instruments used to guide the flight. This exhibit brings back fond memories for anyone who watched those grainy images of the moon landings on TV. And for those who missed it, history comes alive through simulated experience.

How to Watch a Rocket Launch

Since the early days of the U.S. space program, watching a launch has been an unforgettable thrill. The beaches of the Space Coast are lined with people training binoculars to the sky when launches are scheduled from the Kennedy Space Center or Cape Canaveral Air Force Station to the north. Workers leave their desks to observe from windows or parking lots. Teachers guide students outside to look up. Essentially, life stops when a launch is scheduled. But seeing the launch isn’t the only sensory experience during blastoff. The ground beneath shakes (is this what an earthquake feels like?) and the rumbling roar is heard from miles away. The visitors complex offers several ways to see a launch, these days rockets, from closer to the action than any another other spot on the Space Coast.  If launches are during regular visitors complex hours, viewing is included in admission. There are special viewing areas for additional fees from various sites. Each launch is different and so are the viewing sites and times. It is important to remember that the schedule can change because of weather or mechanical issues. Visitors with their hearts set on seeing a launch should build in some extra time … just in case.

Florida Travel: Where to See a Rocket Launch in Florida