The One Downtown Tallahassee Block Everyone Should Walk

In 1955, Rosa Parks set off this country’s first bus boycott of the civil rights movement.

A few months later, the second major boycott got underway… in Tallahassee. Now, a new memorial commemorates those who sacrificed for equality.

The Tallahassee-Leon County Civil Rights Heritage Walk was dedicated on Sept. 30, 2013. The sidewalk memorial is only a half-block long, but it packs in an enormous amount of history.

The memorial honors 50 of Tallahassee's “foot soldiers” -- folks who took part in the 1956 bus boycott and, later, lunch counter sit-ins.

One of the honorees is the late Rev. C.K. Steele, who’s known as the Martin Luther King Jr. of Tallahassee.

“We have moved forward by leaps and bounds,” says his son, the Rev. Henry Steele. “Because we have a long ways to go, doesn’t indicate that we haven’t come from a distance.”

But you won’t have to go far at all to get a free dose of history. The next time you find yourself treading the streets of downtown Tallahassee and you get to East Jefferson Street at Monroe Street, look down. Your spirit will be lifted up.

To learn more about Tallahassee’s role in the civil rights movement, check out the documentary Footsteps to Freedom. You can view it below. 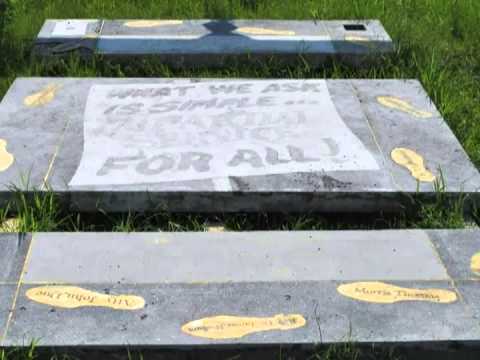