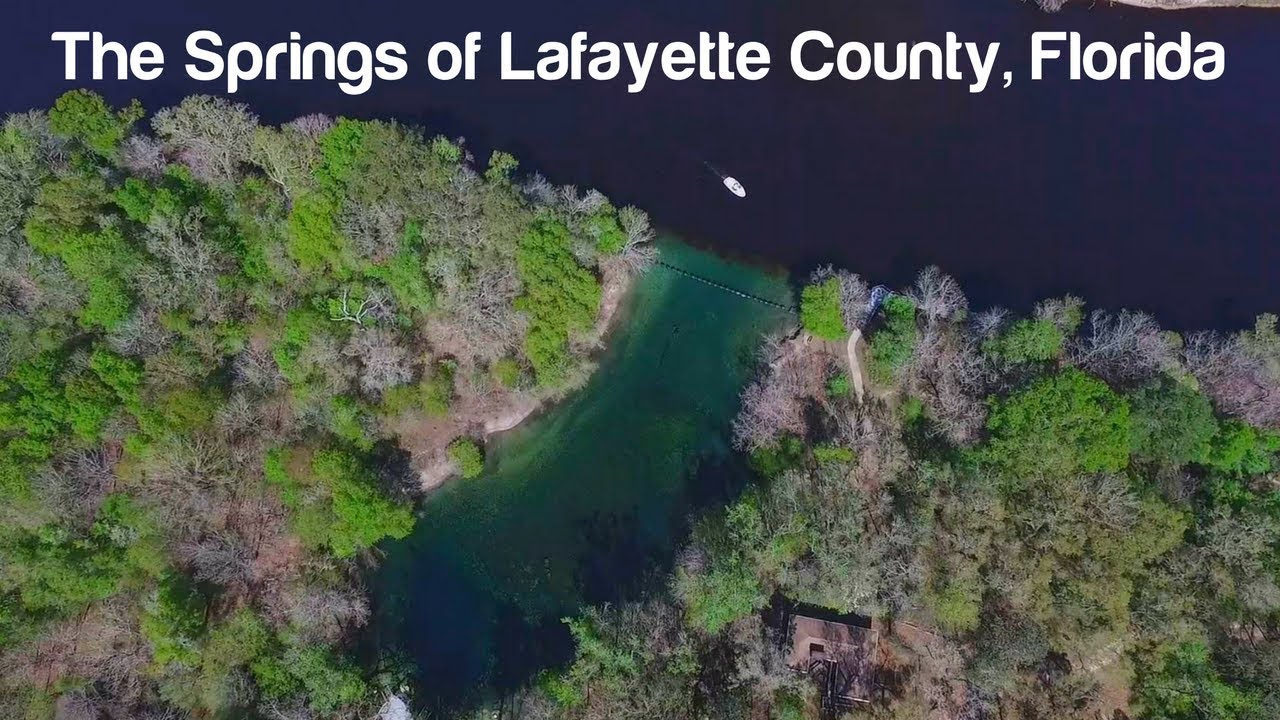 That’s understandable. Of Florida’s 67 counties, Lafayette County ranks 66th in population (as of 2010, 8,870). But the slight population is not to say there’s not much to see. In fact, with U.S. 27 crossing the county to connect two of the state’s dominant colleges, Lafayette seems to be a great place for entrepreneurs.

As in other rural counties, you’ll have to dig a little deeper to find activities appealing to travelers, but natural springs, riding trails, and down home festivals are there if you look.

The difference in Lafayette (locals pronounce it Lah-FAY-ette) is that most are widespread which could lead to some backtracking. That said, the best way to explore may be mapping out your own road trip based on these six great places.

The county seat happens to be the largest town in Lafayette County, because from Airline to Hatchbend every other place is an unincorporated community. But don’t confuse ‘largest’ with “active.” Mayo is still a sleepy Southern town where Spanish moss dangles from old oaks and a stately old courthouse sits at the center of town. Built in 1908 as the third county courthouse (the first burned down and the second was moved across the street), the grand building is as picturesque as any in Florida. It’s always a treat to find these architectural classics. You’ll see them in these rural county seats, in places like LaBelle, Dade City, Inverness, and Live Oak -- each built nearly a century ago and each a far cry from the functional, utilitarian look of today’s government buildings.

Lafayette’s second county courthouse was in use between 1883 and 1907 when it was moved across the street to make room for the new model. Nine decades later, the building was transformed into Le Chateau de Lafayette, a bed and breakfast. The inn promotes itself as being at the epicenter of a circle of state parks and nearby attractions, although most are found in neighboring counties.

At the crossroads of Florida’s Big Bend, the commercial district that had looked old and forgotten, with shuttered buildings and vacant storefronts, is showing signs of renewal as a handful of restaurants and a few shops opened their doors. Especially noteworthy: Tumbleweed's Smokehouse.

Opened in 2012 by a former hospital executive, the Smokehouse combines great service with impressive cooking, and it seems the entire population of Mayo shows up to dine on BBQ pork, chicken, brisket, and ribs, smoked turkey, homemade soups, grilled shrimp, fried mullet, baked beans, okra, and coleslaw. Others just drop in for carry-out meals, pies, and jarred preserves sold in the gift shop. On the next block, a fellow entrepreneur opened the Great Southern Biscuit Company, a bistro serving a wide variety of dishes including shrimp and grits, hamburgers, crab cakes, sweet homemade desserts, and stacked sandwiches (chicken, pork chops, BLTs, ham) served on homemade biscuits.

Prior to the arrival of these dining options, the only game in town was the Mayo Café, a ‘60s-style diner located along a long, slow bend in U.S. 27. It’s still here, along with fried chicken and a buffet. Next door, the Mayo water tower is a landmark second only to the courthouse. If you get a kick out of the town’s name, the tower is a fun backdrop for a selfie. Beside the water tower, Veterans Memorial Park captures the mood and feel of Mayo like no other place around.

Built in the 1890s, the Old Lafayette County Courthouse is now a bed and breakfast.

The 1908 Lafayette County Courthouse looks imposing in the last light of day. You’ll find this historic building in Mayo, the county seat and the county’s only incorporated town.

A Sunday afternoon visit found a group of teenagers practicing folk dances at the gazebo, most likely for a school event. A grove of oak trees shades the park, a playground is ready for kids, and a log cabin from 1904 was restored in the early 1980s to become the town’s heritage center. Veterans Memorial Park is also the town’s social center, the gathering place during October’s Pioneer Days Festival and Parade.

There may not be much in Mayo, but there’s enough. If you have an entrepreneurial spirit, there can be even more.

Northwest of Mayo, turn right onto C.R. 292 and a few miles down the road you’ll reach the south entrance of Lafayette Blue Springs State Park. There are nearly a dozen Blue Springs in Florida, but probably none look more like an old-fashioned swimmin’ hole than this.

Tree limbs droop into the water, spare clothes hang from branches, and laughter fills the hollow that creates the spring. A natural limestone bridge separates the pools where, on one side, folks are jumping into the 72-degree waters from muddy banks while on the opposite side swimmers ease in and follow the flow into the Suwannee River just a few feet away.

The Suwannee holds such an exalted place in Florida folklore it’s easy to forget that, at its essence, it’s really a natural recreational attraction. Today people come to this stretch of the river because a swimming area has been created along its banks and a floating dock provides convenient mooring for jet skis, pontoon boats, and ski boats. Muddy trails and thick woods enhance the park’s authenticity, and on the opposite bank a few houses camouflaged by vegetation create a lazy scene that brings to mind Stephen Foster’s classic tune.

If you didn’t know there were showers, restrooms, picnic pavilions, grills, and camping (primitive as well as a river camp for paddlers along the Suwannee River Wilderness Trail), you’d suspect you were the first person to ever visit this place. But Paleo-Indians first arrived in this area 14,000 years ago and Seminole Indians were here until 1842. When you arrive you’ll find five 2/1 rental vacation cabins, which sit on stilts above the river bank, each fully-equipped to sleep six with three beds, a pull-out couch, a kitchen/dining/living room combination, screened porch, electric fireplace, and picnic bench. There are even more reasons to plan your great escape, with bicycling, hiking, and wildlife viewing adding to the experience.

Since you’re in the north part of the county, before heading to your next destination head on over to the unincorporated community of Day. There’s not much to Day, but if you take a picture by the town sign you can tell your friends you went to Day yesterday.

Eleven miles south of Mayo on S.R. 51 is Cook’s Hammock, an unincorporated community pulled from the pages of a Eudora Welty novel. In this setting, a rather elegant sign marks the entrance to the R.O. Equestrian Ranch -- a sign that something wonderful awaits beyond the tree line.

Follow the dirt road through the forest and a few hundred yards on, the woods part and reveal widespread pastures where horses are galloping and grazing and a magnificent meeting center mirroring J.R. Ewing’s Southfork Ranch.

The creation of Red and Olive Schulte, the secluded 2,500-acre equestrian park abuts 20,000 acres of public lands intersected by the Crossway Branch and Owl Creek that feed into the Steinhatchee River. Along with the Cracker-style visitor center that can be rented for weddings, reunions, graduations, holiday events, and private parties, the park has a 32-unit RV campground, primitive camping, and cottages. Long-range plans include additional camping facilities, cabins, a covered arena, outdoor arena, stables, a cross-country course, and a 20-mile Steinhatchee River trail. Whether you’re a novice or experienced rider, if you’re in search of a new destination with an Old Florida feel, miles of trails stretching across this expansive ranch will take you there – and take you back.

Should you arrive from the southeast on U.S. 27 and cross the Suwannee River at Branford, a few miles ahead look for the sign that directs you to the Troy Spring State Park where a 70-foot deep, first magnitude spring is ideal for canoeing, boating, swimming, snorkeling, and open-water scuba diving. What else? It’s where you’ll find the remnants of a Civil War-era steamboat. In 1863 the Madison, a mail boat/general store that had been retrofitted into a gunboat, was scuttled to keep it away from the Yankees. After more than 150 years underwater, what remains are some metal spikes and keel rib timbers.

Accessed 11 miles south of U.S. 27 on C.R. 405, at 31,318 acres Mallory Swamp Wildlife Management Area is a mixture of cypress swamps, titi swamps, and peat bogs that are still recovering from a severe tragedy. After industrial landowners changed the natural flow of water by building roads and canals, in 2001 a lightning strike sparked one of the largest wildfires in Florida history, eventually torching more than 60,000 acres. Fifteen years later, the land is still recovering and is a place you go when you truly want to experience Florida wilderness. It is a place for hunting, fishing, and viewing wildlife viewing that includes white-tailed deer, feral hogs, turkey, limpkins, wood storks, and great blue herons. Although no camping is permitted, you can get a good sense of place via nearly 100 miles of grassy roads that are ready for ATVs, horseback riding, hiking, and biking.

The scarcity of lodging in Lafayette County doesn’t mean there’s no place to stay. In fact, one of the best places to stay is one of the most interesting places you could find on a road trip adventure.

A few miles east of Mayo at the northern end of C.R. 354, the Suwannee River Rendezvous Resort is a 40-acre family-friendly riverside resort filled with life and activity. Look around and you’ll find an RV park equipped with paved streets, wi-fi, three swimming pools, hot tubs, laundry rooms, fire rings, and lounges. But that only scratches the surface.

After purchasing the resort a few years ago (it’s been here since the 1950s) Frank and Susie Page created an active, pet-friendly village comprised of the 160-site RV park along with 15 tent spots and 21 types of lodging including cabins. Closer to the river, by the check-in desk is a small convenience store, a cozy den that encircles an indoor fire pit, a stage for live entertainment, and Grandma Susie’s Cookin’ Shack where you can order items like cheeseburgers, wings, and breaded pickles at a walk-up window and then dine inside or enjoy al fresco.

Down the bank, Convict Spring is a small natural spring that flows into the neighboring Suwannee River. The name, according to Susie, harkens to the days when prisoners at a local penitentiary were brought to the spring to bathe. Some were later tasked with building concrete walls, steps, and sidewalks around the natural feature and the name seemed to fit. Most guests, especially kids, seem to prefer the river. Coating themselves in mud, they love climbing a tree that’s angled above the water, and then taking the plunge. The resort owns 1,500 feet of riverfront, and canoes and kayaks can be rented.

Florida at its best.

Three miles north of Mayo on Highway 51 is one more piece of Florida history. Named for the former county judge, Hal W. Adams Bridge became the state’s first suspension bridge when it was built across the Suwannee River into Suwannee County in 1947.