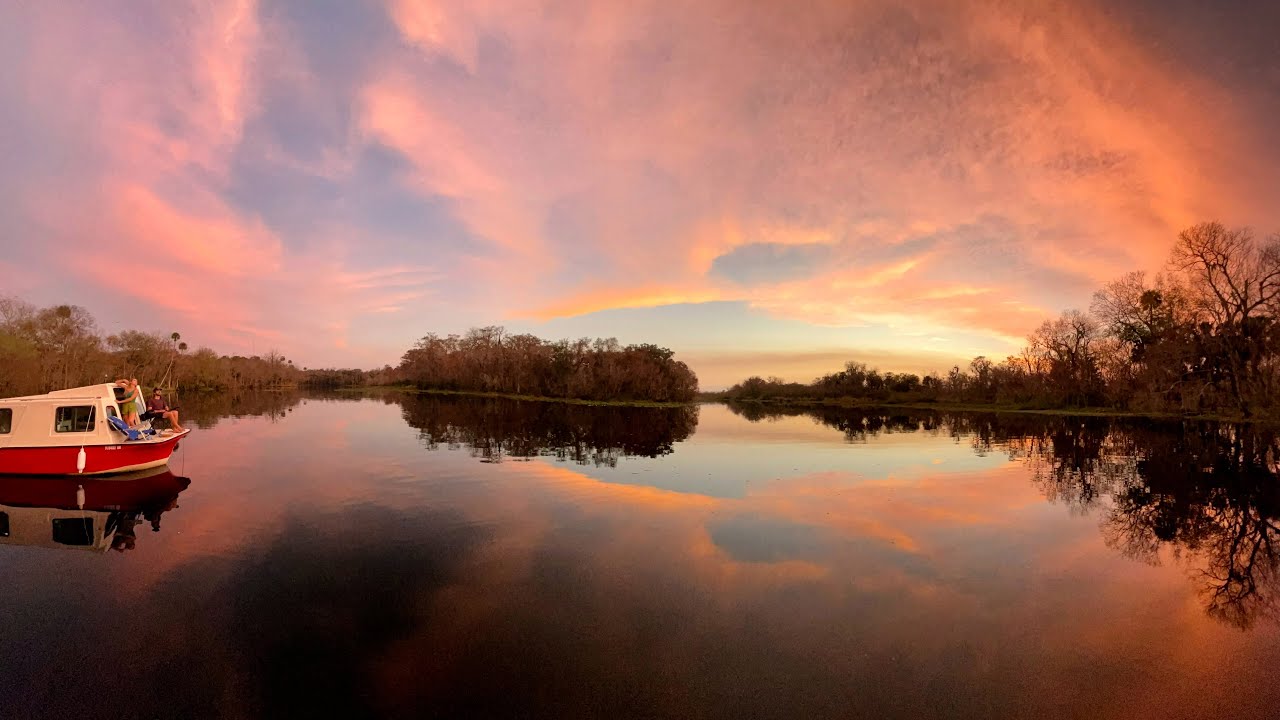 Tiny Houseboats Carry the Curious into the Heart of Native Florida

This is home for the truly native Floridians: raptors such as red-shouldered hawks, osprey, and bald eagles; songbirds like the pine warbler and shore birds like the Wilson’s snipe; and endangered species … manatees, wood stork, and whooping crane.

If forced to choose one natural phenomenon from many adventures on the St. Johns River into the Lake Woodruff National Wildlife Refuge, Rick Phillips’ recall is reflex. There was the day that he and Carrie Lambert took their tiny houseboat onto the Norris Dead River, a narrow, serpentine tributary of the St. Johns River that with each spin of the propeller leaves civilization far behind.

They anchored for the night in a cove. With no light pollution, the stars were brilliant and close. At eye level, the tree line was identifiable in silhouette. In the blackness, faint flickerings demanded their attention. It turned out the woods were full of these pinheads of light. What?

Rick, who grew up in Central Florida and spent many years on the water in kayaks, had never seen them before.

Experiences such as this gave birth in 2017 to Tiny Houseboat Adventures. Welcome to a Florida vacation experience that is slight in stature but great in possibility.

The boats are built for intimacy with your passengers and nature -- 18 feet long, 8 feet wide, and 11 inches of draft. A sink and two-burner stove for simple meals. Dining table and couch convert into beds. Private bathroom. A 12-volt fan cools the cabin. Large windows provide panoramic views and a sense of breathing room.

The uninitiated can captain these vessels. Rick Phillips covers the fundamentals in a test drive: turning in circles; tying the dock line to a cleat; and most important, docking the boat. The short version is: Approach the dock at less than walking speed and the boat hook is your friend.

Typical rentals are 2-4 nights, during which you might cover 85 miles of the St. Johns watershed.

Depending on your mood, the options for solitude and/or human connection are plentiful:
- observe the flora and fauna on a languid drift through the wildlife refuge, hike Hontoon Island State Park (insider tip: hot showers), and spend a night in Lightning Bug Cove (Rick named it).
- Immerse body and soul in a clear-as-glass, 72-degree freshwater spring. Silver Glen, DeLeon, and Blue springs are within your reach.
- Tie up at a waterside restaurant for a sitdown meal.

Customers have hailed from New York and California, South America and Africa. Weekends are booked until November. Responding to the demand, Rick Phillips is growing his tiny fleet from two to five boats.

“This is a great experience to share with a significant other,” he says. “Immersed in nature. Like Huck Finn.”