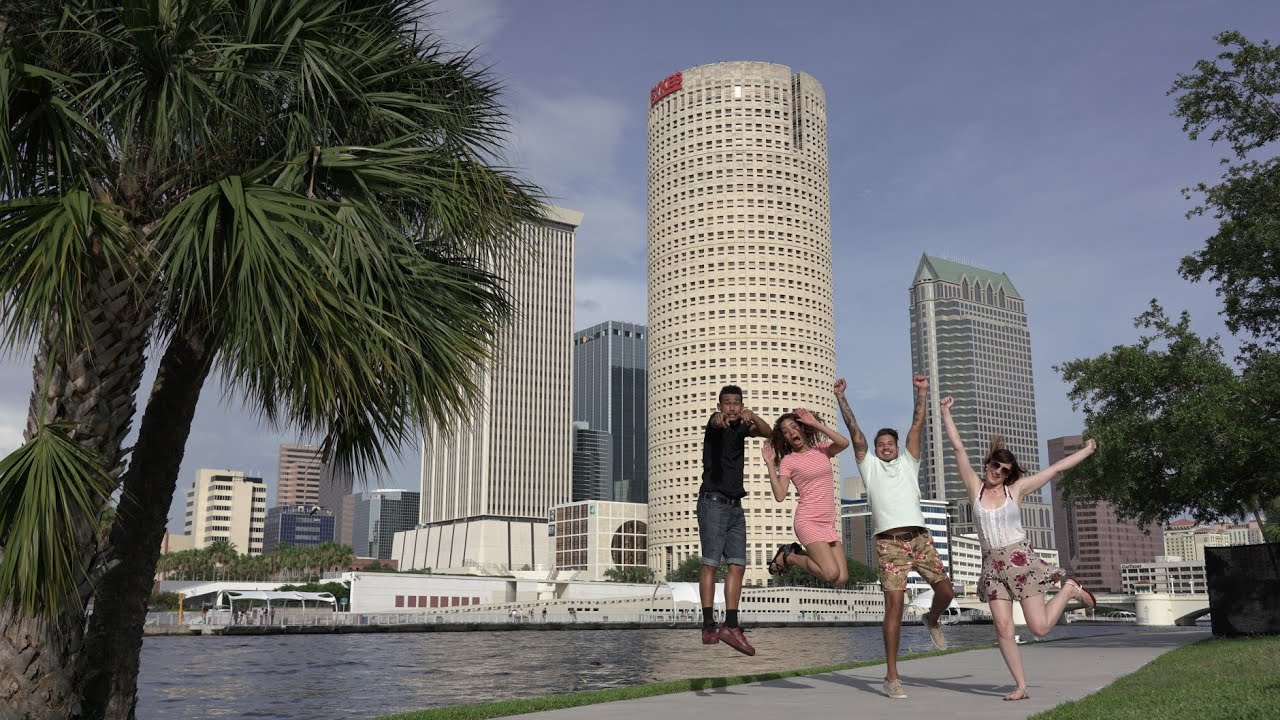 The I-95 odyssey from Boston to Tampa-St. Petersburg is a 1,400-mile commitment on concrete. But this Florida vacation on the central Gulf coast is worth the drive.

And if that last bit stings, Pats fans? If you’re still asking yourself why did Brady and Gronk leave New England and ride off into the sunset to Tampa Bay of all places? Well, wait until you see those sunsets.

What’s more, even before you reach your final destination, consider:
- riding a horse on the broad, flat sands of Amelia Island with the salt breeze and the Atlantic surf’s perfect white noise;
- paddling, hiking, and/or biking the Cross Florida Greenway, the 110-mile linear park from the Gulf of Mexico to the St. Johns River;
- snorkeling and diving the 600 lakes and rivers within Ocala National Forest;
- immersing yourself in the 72-degree goodness of Weeki Wachee Springs and witnessing live mermaids;
- taking a leap of faith and joining a veteran skydiver for a 13,000-foot view (and 110-mph freefall) of the Florida peninsula and the great Gulf of Mexico.

There are so many things to do in Florida on your way to Tampa Bay. Do the wicked smart thing and set aside another day or two at the front and/or back end of your road trip.

There are North Atlantic beaches …

Fernandina, in Florida’s northeast corner, is also the birthplace of the modern shrimping industry. When Jim Crow denied black citizens access to many rights and privileges just 60 years ago, American Beach was the only place in Florida where African-Americans could enjoy the ocean. Boneyard Beach in Jacksonville is so named because of the bleached skeletons of oak trees that have washed ashore.

The A1A Ocean Islands Trail, one of 26 state-designated picturesque drives, is 40 miles of beaches and barrier islands. More than 400 historic places are within reach, including Fort Clinch. The Old Florida Heritage Highway’s 45 miles cover Paynes Prairie (and its bison and wild horses) and Cross Creek, where Marjorie Kinnan Rawlings wrote The Yearling.

There are freshwater springs …

This is a physical and spiritual experience exclusive to Florida that bears repeating. There are more than 700 of these natural gushers that percolate cool, clear-as-glass water from the subterranean Floridan Aquifer. Silver and Alexander  are two excellent diversions.

Close to 200, in fact, when you add up the state and national parks, forests, and wildlife refuges. Santos Trailhead, one of Florida’s two epic-rated mountain bike courses, features 80 miles of single-track trails through a former limestone quarry.

Withlacoochee State Forest and the rivers within are navigable by hike, bike, horse, and canoe. Florida and fauna are abundant, including vulnerable species such as bald eagle, fox squirrel and gopher tortoise.

Fun facts here: Jacksonville happens to be the largest city (in land area) in the contiguous 48 states. There is room to roam: 400-plus parks; 1,100 miles of navigable waterways; 22 miles of beaches; and, between the Atlantic Ocean, St. Johns River, and Intracoastal Waterway, more shoreline than any other city in America.

In a state which rightfully brands itself and some of its cities as the global capitals for sunshine, beaches, theme parks, fishing, golf, citrus, and manatees, Ocala stands out as the Horse Capital of the World. Triple Crown race winners were born and bred here. The U.S. Equestrian team trains here. Local farms welcome visitors and riders.

I just mentioned manatees? Those curious and cute half-ton herbivores who seem to have been made out of Play-Doh? Well, they winter in Crystal River, drawn to the warmer waters of Three Sisters Springs. Any respectable bucket list should include a snorkeling trip among these sea cows.

Blessed by Tampa Bay and the Hillsborough River, Tampa’s neighborhoods and architecture and cuisine reflect its Spanish and Cuban influences.

Ybor City is the historic Cuban district and the not-so-long-ago hub of Tampa’s cigar industry. The Columbia, founded in 1905, is Florida’s oldest restaurant. The Cuban sandwich is a must-experience Florida food icon.

The Riverwalk is a more recent addition to the Tampa waterfront. The 2.6-mile pedestrian trail, a mecca for walkers, riders, and rollers, is the chain that links downtown museums (Glazer Children’s, Tampa Bay History), the performing arts center, restaurants, and food halls -- plus there’s the view of the Moorish minarets of the University of Tampa and access to leisurely water transportation.

The Amalie Arena is one of America’s leading concert venues, an occasional host site for NCAA tournament basketball, and the regular home of the Tampa Bay Lightning, perennial contenders for the National Hockey League’s Stanley Cup. The Amalie also anchors the Channelside entertainment district, which includes the Florida Aquarium and Sparkman Wharf.

Ten minutes northwest of downtown is Raymond James Stadium, home of the National Football League’s Tampa Bay Buccaneers who, you may have heard, have a new quarterback. Across the boulevard from the stadium is the hated New York Yankees’ spring training complex.

Craft beer is big business in Florida and the Tampa Bay region is the de facto state capital. Cigar City Brewing is the lead dog.

Busch Gardens, part of the SeaWorld family of attractions, is an Africa-themed park with safari experiences (the giraffe’s tongue is about a foot long and purple) and a half-dozen stomach-inverting roller coasters and rides.

If you long for an easier tempo and fewer people, there are urban sanctuaries. Bayshore Boulevard is the tree-lined, curving divider between the top of Hillsborough Bay and some of south Tampa’s most elegant neighborhoods. The broad, waterside sidewalk, 4-plus miles long and bounded by a hip-high white balustrade, is common ground for runners and walkers. Paddlers rule at Hillsborough River State Park and Lettuce Lake Park, which quickly transition the visitor from sound and fury to solitude.

Clearwater Beach is a favorite with families.

The city, built on the foundational legacy of public waterfront park space,  embraced the fine and performing arts, and the downtown was reborn as a residential-retail district that embraces tourism.

Newer museums such as the Chihuly Collection, James Museum of Western and Wildlife Art, and the Imagine Museum have joined the world-class Dali and Museum of Fine Arts, plus more intimate spaces such as Studio@620 and Florida CraftArt.

Add sunshine and a view of Tampa Bay and there is ample inspiration to park the car and walk.

There is even a trolley to transport you 10 miles west to some of the best beaches in the world. Starting at the southern tip is Fort DeSoto North Beach, a family favorite for its gentle surf and natural shaded picnic areas, and a kiteboarder’s favorite for its tidal pools and offshore breezes.

To the far north is Caladesi Island, a remote state park that is less about amenities and more about detachment. Between those bookends are famous and popular vacation names: Clearwater Beach and its eponymous pier; Madeira Beach, the historic point of departure for the grouper fishing fleet; and St. Pete Beach, home of the Don CeSar Resort, aka the Pink Palace.

Where Tampa has its Riverwalk, St. Pete-Clearwater has the Pinellas Trail, a 45-mile urban escape that allows pedestrians and riders to bypass the busy and access the natural. In communities like Dunedin and Tarpon Springs, the Trail is footsteps from a local craft beer and a sandwich.

In March, spring training is a zen state for a baseball fan -- 75-degree, blue-sky days and your favorite players so close you can see their faces without a telescope.

And those sunsets? They are a communal moment on this peninsula every day. Try one from the roof of the Hurricane Restaurant in Pass-a-Grille or on Pier 60 in Clearwater.

You can create your own travel itinerary for driving from Boston to Tampa-St. Pete-Clearwater with the VISIT FLORIDA planning tool. Just enjoy the ride by getting out of the car and seeing Florida.