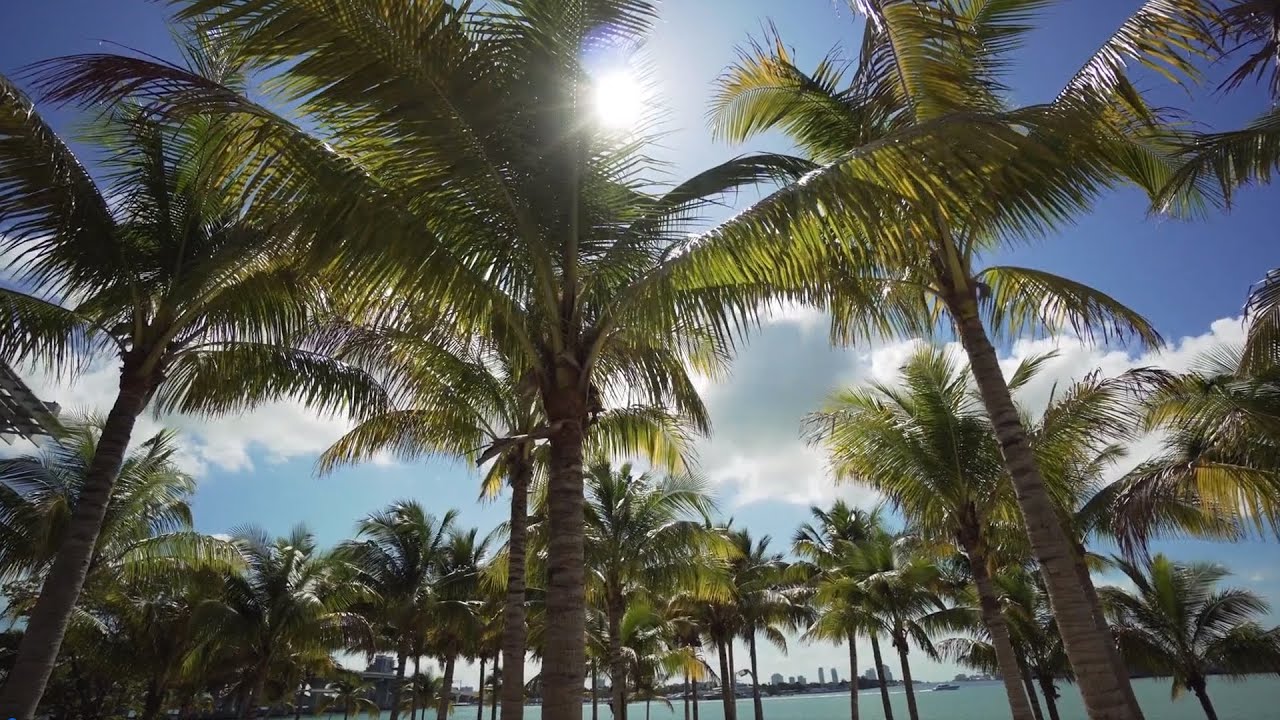 The road trip vacation destination is Miami, easily one of the most up-tempo, multi-lingual, caffeinated places on the planet.

From Washington, D.C., no slouch in the Fast Pace Dept., the drive is more than 1,000 high-speed (and sometimes high-intensity) miles on Interstate 95.

The road-tripper’s reflex will be to push on -- Virginia, the Carolinas, Georgia, and then … Florida! Yes! Stop at the Welcome Center for some perfunctory calisthenics and a free orange juice and get back on the road. We are so close!

Well, not really. Save your exclamation points. More than a third of the drive is left, roughly 400 miles of Florida’s Atlantic seaboard. But I’m here to advise you: That’s a good thing.

Rather than ping-ponging from one energetic global capital to another, imagine …

- a beach and a book and nary a human being or building on the 24 unsullied miles of Canaveral National Seashore;
- a window seat at 15 mph to the songbirds, seabirds, and raptors along the Black Point Drive Loop at Merritt Island National Wildlife Refuge;
- an endless view of lightly toasted sand and blue-green surf from the saddle of a horse on Hutchinson Island;
- a solitary kayak to nowhere through the basin marsh that predates modern Florida at Savannas Preserve State Park;
- an upper-deck seat and a colorful cocktail on a tour of Fort Lauderdale’s waterways, yachts, and mansions aboard the Jungle Queen.

There are so many things to do on your Florida vacation, so many reasons to take your time. You will be awestruck and at once prompted to go quiet, to hear yourself breathe, to R-E-L-A-X.

The Anastasia limestone shoreline of Blowing Rocks Preserve provides a daily visual drama when the incoming Atlantic surf explodes upward through the nooks and crannies.

The entirety of the Atlantic coastline is within reach of I-95. The constant blessings of sunshine and surf leave the Jacksonville beaches shining like a freshly scrubbed floor; or radiating warmth from the cinnamon sands of Flagler Beach; or exploding sea spray through the porous limestone crannies at Blowing Rocks Preserve.

Eleven of Florida’s 26 designated scenic highways are worthy of a side trip along the way. In a perfect world, you will cruise the A1A Scenic and Historic Coastal Byway or the Ormond Scenic Loop or the Florida Keys Scenic Highway with the ragtop down and the love of your life within arm’s reach.

There are state and national parks …

The Timucuan Ecological and Historic Preserve is the 6,000-year-old home of the long-ago native Americans who were the original Floridians. Within the same preserve, American Beach was once an exclusive beach access for African-Americans restricted by segregationist Florida.

At the Archie Carr National Wildlife Refuge in Melbourne Beach, nesting sea turtles are the annual guests of honor. Bonnie Gross wrote for VISIT FLORIDA: “(After) digging a hole a foot or two deep with her hind flippers, the turtle starts filling the nest with soft-shelled eggs the size of table tennis balls. She refills the nest with sand and heads back into the ocean. The whole process takes 30 to 60 minutes. ... Two months later, the eggs hatch and scores of tiny turtles emerge from the sand at night and clamber into the water.”

Jacksonville, the first big city on your journey through Florida, also happens to be the largest city (in land area) in the contiguous 48 states.

There is room to roam here: 400-plus city, county, state, and national parks; 1,100 miles of navigable waterways; 22 miles of beaches; and, between the Atlantic Ocean, St. Johns River, and Intracoastal Waterway, more shoreline than any other city in America.

The Florida tourism story has origins here. Henry Flagler, the Standard Oil industrialist, started the East Coast Railway in northeast Florida in 1885 and the local college and its architectural centerpiece bear his name.

Daytona Beach is a birthplace of American auto racing and the Speedway is an American sports shrine worthy of sharing a sentence with Indy’s Brickyard, baseball’s Fenway Park and Wrigley Field, and Madison Square Garden. The racing began on the firm beach sand in 1903 and ultimately led to the formation of NASCAR.

Kennedy Space Center has been the world’s launchpad for manned space flight for 60 years. The names are iconic and familiar to generations: Mercury, Gemini, Apollo, Atlantis, and now SpaceX. At the Kennedy Visitors Center, you can stroll through a garden of rockets or watch one rise into the blue, you can meet an astronaut and see if you have the right stuff to land a space shuttle.

Stuart is the Sailfish Capital of the World. Offshore in the Atlantic, on the edge of the Gulf Stream, an underwater banquet table attracts these spectacular sport fish. “They’re faster than a shark. They’re afraid of nothing,” outdoorsman and native Floridian Terry Gibson told VISIT FLORIDA. “Their sails come out of the water and they are so fast, it sounds like the tearing of a sheet.” What’s more, “when they get excited, they change colors like a disco ball: purple, blue, gold, brown.”

Fort Lauderdale is a vacation unto itself. Aptly named “the Venice of America,” Lauderdale has 165 miles of navigable waterways. A boat tour -- or, for the more ambitious, a paddleboard -- is a great way to see the city and its waterfront neighborhoods. Or follow the red brick road of the Riverwalk, the landscaped park, to the Arts and Entertainment District.

Diversity is celebrated in every walk of life here:
- to the west, take an airboat ride in the Everglades, the legendary River of Grass.
- to the north, Wilton Manors is the civic heart of South Florida’s LGBTQ+ community.
- to the east, on Fort Lauderdale Beach, the stark white wave wall defines the promenade that parallels the sand and the Atlantic Ocean.
- to the south, Hollywood’s Broadwalk (note the spelling) is one of the most visually inspiring strolls (or rides) in America. After the walk, cross the barrier island for a waterfront burger at Le Tub.

A sailboat off the coast of Miami is a treat for the eyes.

- Overtown. From miamiandbeaches.com: “Once known as the ‘Broadway of the South,’ Overtown was a mecca for popular nightclubs and legendary performers such as Billie Holiday, Ella Fitzgerald, Count Basie and Josephine Baker. Specialty stores, boutiques and soul food restaurants reflect the area’s rich culture with Southern and island influences.”
- Wynwood. The rebirth of the Miami warehouse district began with murals and graffiti. It’s so much more today. Again, from miamiandbeaches.com: “There are more than 70 galleries and museums, dozens of new restaurants and bars, and hundreds of companies, creators, and innovators working in a place that just feels alive.”
- Little Havana. Calle Ocho is where Miami’s Cuban exile experience began. Sip cafecito and eat guava and cheese pastelitos at Versailles. Take your Cuban sandwich to Domino Park and watch the furious action. And after the sun sets, let your hips sway to the beat at Ball and Chain.

The Arts and the Performers

- Of Perez Art Museum Miami, Scott Barnet wrote for VISIT FLORIDA: “The permanent collection and rotating exhibits here draw heavily upon the works of Latin American and Caribbean artists and strive to reflect Miami’s geographic and cultural links. And the building, designed by the Pritzker Prize-winning Swiss architectural firm Herzog & de Meuron, stands as a work of art in itself.”
- The Phillip and Patricia Frost Museum “provides various pathways of discovery as you wind your way through its white curving exterior, with Escher-like stairways and an exposed stack of elevators connecting six levels of scientific activity.

South Florida’s proximity to the Atlantic Ocean inspired the massive aquarium, affectionately known as the ‘martini glass,’ a design in the round that serves as the museum’s central feature. The 500,000-gallon aquarium can be viewed from above, around its sides and even from below -- The Deep -- with a 30-foot wide Oculus lens.”
- Of the Adrienne Arsht Center for the Performing Arts Saundra Amrhein wrote: “The Center and its two massive buildings straddle Biscayne Boulevard like enormous ships anchored at a dock. … On the north side of downtown Miami, the Center sits in the middle of a once-blighted corridor that is exploding with development.”
- Big cities have big-time sports. Miami has baseball’s Marlins, basketball’s Heat, football’s Dolphins, hockey’s Panthers, soccer’s Inter Miami CF, plus multiple major universities.

- Neighboring cosmopolitan Miami is the Everglades National Park, the subtropical wilderness that is home to the endangered Florida panther, a thriving alligator population, and the unconquered Miccosukee tribe. The River of Grass is best explored by airboat or brave swamp walkers.
- Biscayne National Park is a snorkeler’s playground that includes the northern portion of the world's third-largest coral reef system.
- South Beach is one of the most stunning stretches of coast on the planet. Farther north is Haulover Park, Florida’s best-known public nude beach.

AND IF YOU’RE THIS FAR SOUTH … THE FLORIDA KEYS

- The Florida Keys Highway, more familiar to locals as the Overseas Highway, is one of America’s premier scenic drives: 106 miles of “screensaver photos so blindingly gorgeous that they hardly look real.”

Islamorada
- This is the Sportfishing Capital of the World. But activities under, above or near the water are available here 24 hours a day. For a land-based adrenalin rush, dangle a minnow from the dock at Robbie’s and watch a 6-foot tarpon engulf the free meal and your helping hand.

You can create your own travel itinerary for driving from D.C. to Miami with the VISIT FLORIDA planning tool. Take your time and enjoy the ride.