A skateboarder competes in the Tampa Pro, an annual professional skateboard competition in Tampa.

Skateboarding, which used to be viewed as a fringe counterculture sport, has matured and entered the mainstream. Florida, a world-class skateboarding center, is square in the middle of that stream.

Historically made up of disaffected urban youth and an extension of 1960s hippie surf culture, skateboarding has grown in stature and respect, with athletes now paid millions to compete in the X-Games and other adrenaline-infused festivals. The industry has an estimated $4.8 billion annual worth, and the sport’s makeup is now as diverse as the country and shows no signs of stopping.

Many Florida municipalities host local skateparks, and communities have grown around these hubs. On any given Saturday, you can pull into one of these skateparks and see middle-aged dads, well past their skating primes, assisting the next generation of young shredders learning to grind, ollie, and navigate lines through street venues and ramps.

With the sport’s relatively economical entry (roughly $100 to $150 for a good deck setup) and accessibility to safe and well-kept skateparks, skateboarding’s popularity transcends age, race, sex, and socioeconomic demographics. This bodes well for the sport that had its humble beginnings in tacking roller skate wheels to the bottom of a piece of wood.

Florida hosts arguably four of the sport’s most iconic skateparks: the Cocoa Beach Skatepark, The Bro Bowl in Tampa, the Skate Park of Tampa, and the Kona USA Skatepark. These parks are not just must-visit destinations when visiting Florida, they’re shrines to a sport that anyone can call their own.

When visiting Florida, make sure to check out these seven must-shred skateparks or others nearby.

Yumeka Oda competes in the Tampa Pro at the Skatepark of Tampa.

Founded in 1993, the Skate Park of Tampa (SPoT) is home to the Tampa Pro and Tampa Am, two of the most important contests on the skating calendar. SPot’s contests and the rise of skating go hand in glove, and many commentators attribute the growth of skateboarding to the rise of SPoT’s vibrant Nineties scene.

Though the freewheeling 90s contributed much to the counterculture appeal of skating, SPoT has very much become a destination for families seeking the lore and fame of the scene and to learning to skate together. SPoT has vibrant after school and summer camp programs and features an arts gallery and music venue.

In addition to great kids’ programs, Skate Park of Tampa, right near Ybor City and the Amelia Arena District, SPoT hosts one of the most dynamic and ever-changing street courses in the world. The indoors street venue changes yearly, leaving skaters with an adrenaline-inspiring palate.

Outside, the park hosts a bowl, a good flow track, more street features and every type of mini ramp, halfpipe, and ramp configuration a skater can desire. Skaters can ride the very ramps that heroes and legends like Tony Hawk, Paul Rodriguez, and Bucky Lasek ride. And if you forget anything on your trip, SPoT has a world class shop right on premise.

Other skateparks near Tampa:

Attractions near Skatepark of Tampa:

Maria Bracamonte skates for fun during the Tampa Pro at the Skatepark of Tampa.

Lot 11 Skatepark is located right in the heart of downtown Miami and directly under an I-95 underpass. The 45,000-square-foot park has a main bowl for the most advanced skater and rails and smaller ramps for the beginner. Lot 11 Skatepark is a project of the nonprofit SkateFree, co-founded by area philanthropist Nick Katz, and part of a $10,000 grant from the Miami Foundation’s Public Space Challenge.

The park shields skaters from South Florida’s heat and sun and provides shelter during the rainy season. Totally free, Lot 11 Skatepark provides safe street and vert skating for all age groups and attracts visitors and pros from around the world.

Other skateparks near Miami:

The Tampa Pro is an annual professional skateboard competition in Tampa.

The Orlando Skatepark is a municipal, kid-friendly skatepark. The park offers summer camps for kids 5-14 and all skill levels are accepted. The park draws the occasional pro and is centrally located one mile from the city center.

The park’s flow bowl is a concrete lover’s dream of long lines and smooth transitions and a speed freak’s license to open up the throttle. Along with Orlando Skatepark’s sweet flow bowl, the park boasts an excellent traditional bowl and pool that provides vert lovers a chance to get above the coping and into the air.

Accessible for all skill levels, the Orlando Skatepark provides a great street venue that allows skaters to progress from beginning obstacles to advanced street terrain. The park is renowned in Florida as one of the best concrete parks in the nation and the best in the state.

The park is exposed to the sun and elements. Come prepared and bring plenty of water. Though an urban exposed landscape, security is nearby and its employees often make walkthroughs, so even the youngest grommets are safe.

Other Skateparks near Orlando:

Outside the Tampa Pro, an annual professional skateboard competition in Tampa.

Kona Skatepark USA is so ubiquitous in the sport’s iconography that Tony Hawk’s Pro Skate 4 dedicates an entire level of gameplay to the park’s twists, turns, and ramps, extending the park’s fame well outside of the skating world.

Featuring one of the first snake runs, the flow of Kona allows skaters the ability to link together endless runs through the park’s features—bowls, coping grinds, quarter pipes, tables, and stairs. If the street and park flow is not enough, skaters can test their skills on the first vert halfpipe where the sport’s aerial nature was born.

For any hardcore skater or student of the sport, the trip to Kona Skatepark USA is a must: skaters can bask in the shadow of the park’s greatest feature, the aptly named Tombstone, from which all of the park’s runs originate.

Other skateparks near Jacksonville:

A skateboarder competes in the Tampa Pro, an annual professional skateboard competition in Tampa.

The Waterboyz Skatepark is a family-friendly park that hosts birthday parties, skate camps, and seminars that can help both the novice to the pro skater. Waterboyz prides itself in all things board-related, but they’ve also created an atmosphere that empowers young women and welcomes newcomers to the sport.

The park is an indoor, 5,000-square-foot, all-wood street plaza style venue that allows skaters of all abilities the opportunity to hone their street skills, while introducing their tricks to mini-ramps and less than vertical obstacles.

Waterboyz Skatepark also houses a full blown surf shop, skate shop, and surfboard shaping bay. The vibe at the Waterboyz is a laid back, welcomes all comers with Aloha spirit. Not far from the amenities and attractions of Pensacola Beach, Waterboyz is a must-shred, must-shop family destination.

Other skateparks near Pensacola:

How many junior and high schools have their own skatepark just walking distance from their classrooms? Cocoa Beach Skatepark sits right between the schools and has been home to countless pro skaters and surfers. Though small, the images and lore of the park extend well beyond the cool factor of a schoolyard playground.

The Cocoa Beach Skatepark’s flowing bowl is a definite throwback to the long lines and carves of the 70’s surf scene that influenced skate style before the invention of the three-finned surfboard took surfers vertical and “beyond the lip.” Designed for long arcs and minimal air, the flow bowl looks like an ill-formed six-leafed clover with lines designed for speed and style. But one feature of the park stands out in all skating circles: the famous Clam Shell.

Imagine a bowl tilted perpendicularly on its edge at the bottom of another bowl. The Clam Shell rests at the end of the flow bowl, nearest the park’s largest speed line. The Clam Shell awaits at the end of a short narrow run that requires the strongest of legs to handle the g-force a skater can generate as she attempts to get “upside-down” on the shell’s roof.

No skater worth his/her weight in coping wax or skate keys can truly call themselves a traveling skater until they’ve felt the thrill of challenging the Clam Shell.

Other skateparks near Cocoa Beach:

The Edge is one of the most diverse, well-funded, and best maintained skateparks in Florida. The 40,000-square-foot park is a future X Games participant’s dream. With well-maintained wood and concrete features, the park offers a diverse landscape of ramps, stairs, grinds, bowls, plazas, snake runs, and pools to offer even the most discerning ripper something to spend a few hours exploring.

The Edge Johnny Nocera Skatepark flows from obstacle to obstacle. The park’s layout and flow is a throwback to the earlier days of skating. The park limits capacity to 100 skaters or BMXers, leaving plenty of free space for unobstructed runs and open obstacles.

Other skateparks near Naples: 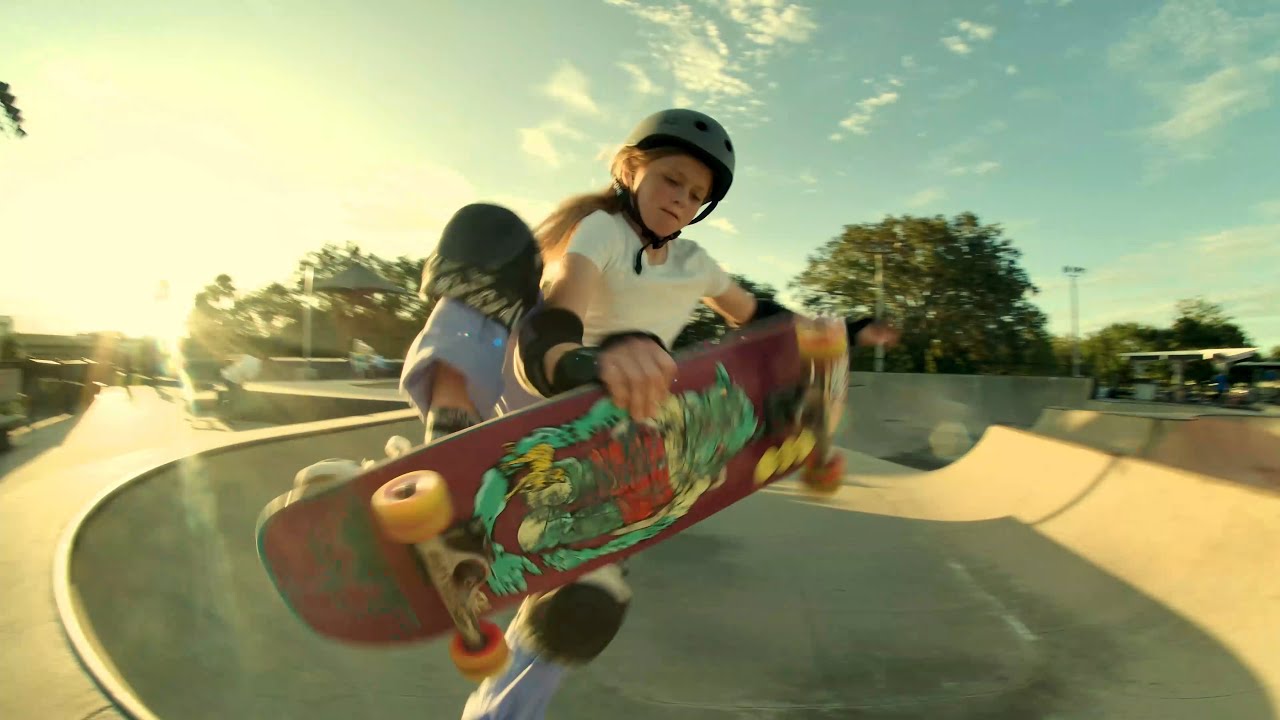