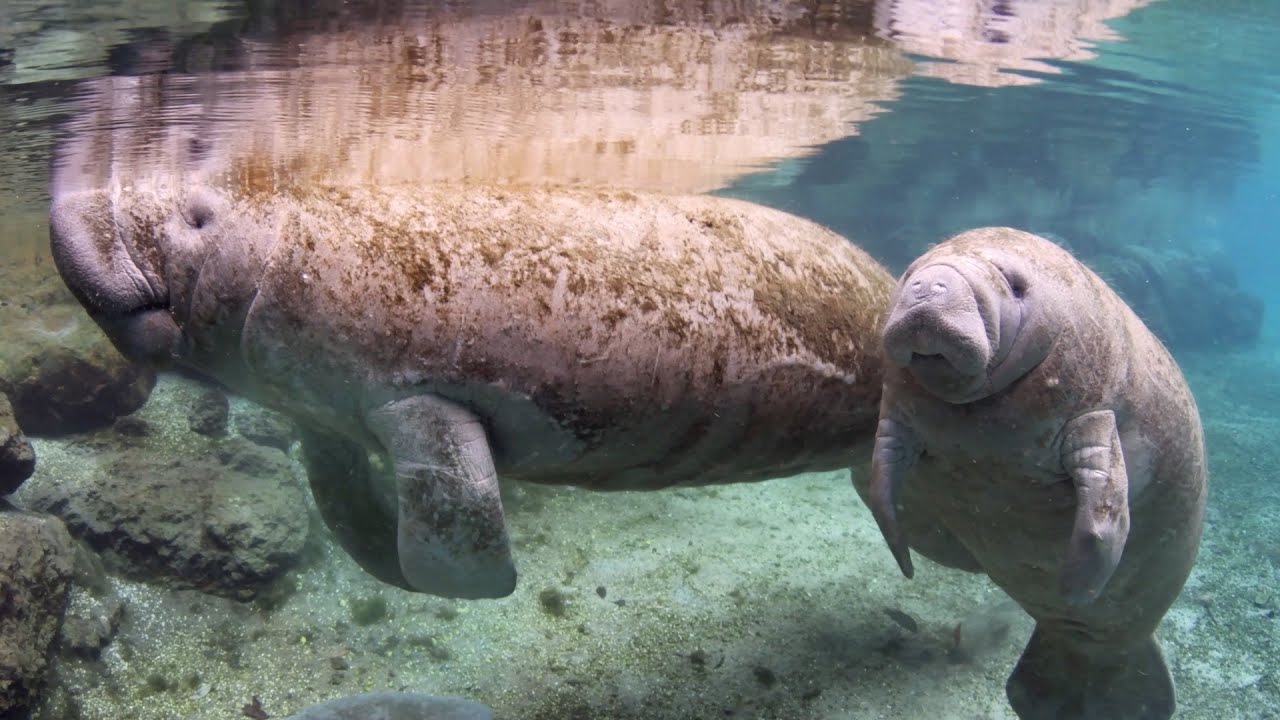 How to Snorkel with the Manatees in Florida's Crystal River

To say manatees are huge is not an overstatement. They are enormous by any standard, measuring as long as 10 feet and weighing up to 1,000 pounds.

In Citrus County, you can snorkel with these gentle, curious mammals-- in the wild. Located on Florida’s central west coast, the County is the only place in North America where you can legally enjoy this epic adventure.

Here's a travelogue about my trip...

Crystal River is one of the best places to see manatees.

The water in the Three Sisters area of the Crystal River was so clear that I might as well have been gazing through air.

Snorkel with the wild manatees in Crystal River.

I could see as many as 20 manatees at one time. Some rested like giant blimps on the river’s bottom, but many were close to snorkelers. I shivered inside my black wetsuit, listening to the quiet sounds of my breathing and the motion of my arms as they pulled me through the water.

One of the manatees seemed smitten with an underwater photographer. The photographer sported a large belly that gave him roughly the same profile as the manatee, so perhaps the manatee felt some kinship on that basis. Whatever the reason, the creature’s affection was obvious. The manatee lay on the bottom of the river, wrapping his flippers around the photographer’s leg. Another manatee was fascinated by his camera, poking his soft, grey muzzle toward the lens.

A calf was the first manatee to approach me. I guess he approved of the way I scratched his back – softly using my nails to rub the algae off of him, as I had been instructed – because he flipped over to reveal his pale stomach to me, which I also scratched. While he was on his back I could see the little toenails on his flippers, reminiscent of an elephant’s, which made sense, because the elephant is the manatees’ closest living relative.

Some of the manatees rested in their sanctuary, clearly aware of where people were allowed and where they were not. The sanctuary is an area marked off by rope and buoys, so that if a manatee wants to breed, eat, nurse a calf, or just take a snooze, it won’t be bothered.

I never ran out of manatees to play with or watch. I could have stayed there forever, because it was such an incredible, unbelievable thing I was getting to do, but eventually I was frozen enough I could barely bend my fingers or speak, so I paddled over to our boat to swig hot coffee and swaddle myself in towels. But I couldn’t stand to miss out on the fun for long, so I glided out into the water for one last goodbye scratch before we headed back to the dock.

My trip only lasted for four hours, yet I still remember it. I’ll always remember it. I even dream about it sometimes, gazing into the eyes of a gentle giant who swam across the river to greet me.

·     When you first enter the water, it's easy to become overwhelmed by the size of these gentle giants. Don't panic -- they won't hurt you. Relax, float on the surface and enjoy the experience. The calmer you are the more likely a manatee might swim over.

·     Bring lots of warm clothes. The water is a constant 72 degrees, and you’ll be wearing a wetsuit, so it’s not bad when you are in the water. However, when you get out you’ll probably feel chilled.

·     If your tour doesn’t include warm drinks, bring a thermos with your own.  (The colder it is the more active the manatees will be, so you don’t want balmy weather).

·     Ask what equipment your tour includes and what you will need to rent.  A mask, snorkel, and wetsuit are necessary; fins are not. You’ll mainly only need to float, not swim, and if you are unfamiliar with using fins you can stir up the water and frighten the manatees. My trip with Sunshine River Tours included all of the necessary equipment.

·     This is mainly a winter-time activity, since that’s when the manatees migrate into the warm water to feed. A few small groups of manatees live in the river year round, so it may be possible for you to have a quality experience at other times of the year. Ask your guide service for advice.

·     Tipping the boat crew is customary.

·     Consider spending the night before your trip in the area. The manatees are most active in the morning, so some tours begin at the crack of dawn. The state parks here don’t offer camping, but they can provide a list of 20 places in or close to Crystal River that do. I opted for a comfy bed at the Best Western in Crystal River.

·     Follow the rules for manatee interaction. The tour guides tend to be staunch conservationists that take the welfare of these endangered animals seriously. You can only touch manatees with one hand at a time, so that there is never any doubt that you are trying to ride them or hold them. You are not allowed to chase them, and all interaction has to be on their terms. Feeding them is prohibited. Stay out of the sanctuaries, even with your arms.

There are several outfitters and tour operators that'll get you all set up for this bucket-list experience. Here are a few:

Swimming with the Manatees