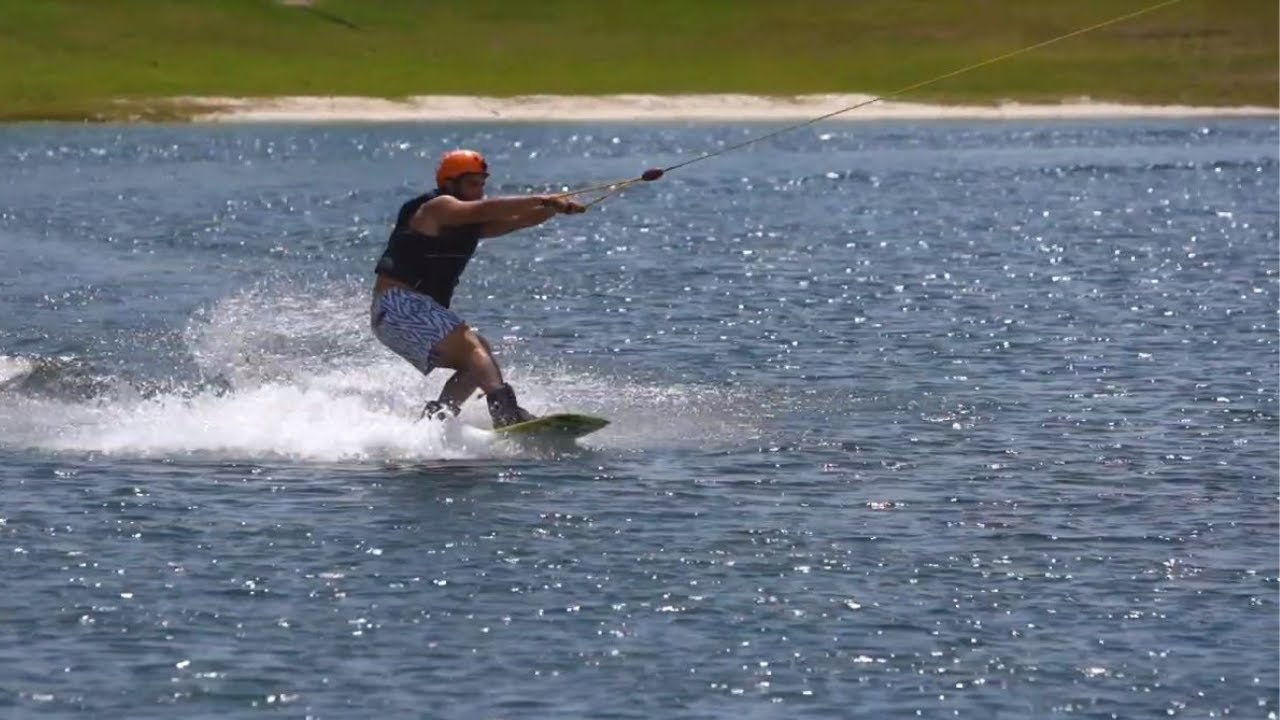 Throughout the state, both man-made and natural water parks keep you cool under the Florida sun.

Feet, flotation and all, my kids and I spent our summer testing out wave pools, sliding down speedy slopes, bobbing on man-made rivers, tubing through "rapids," and generally beating the heat while having an awesome time. Read on to learn more about our adventures, and how to create your own...

I'd like to think it was my obvious sense of adventure, my clever word-smithing, my creativity-in-approach-yet-delivery-on-deadline that earned me this travel assignment, but I fear that this is not so. In the end, I think it boiled down to three seemingly unrelated things: 1. progeny; 2. "floatability;" and 3. shoe size.

1. Progeny: My kids, Andrew and Grace, are about as different as siblings can be. Andrew is lithe, fast, intense, and at an age where pushing the envelope on thrills is becoming more exciting than Christmas morning. Grace is a fashion-conscious, hairbrush-toting, Barbie-lovin' girly-girl. She is not a physical risk-taker. These two would be the perfect litmus test for families considering water park fun.

2. "Floatability": Most members of my family (athletic Andrew being the exception) are excellent floaters. One chubby coworker had the chutzpah to ask why this is so (those of you familiar with body mass index need inquire no further). Perhaps it's not so in today's thin-is-in, celebrity-obsessed world, but in Water World, buoyancy is a good thing.

3. Shoe Size: When my son was born, the delivery nurse shouted, "Look at those feet!" My daughter, the kindergartener, could double-promote her black suede go-go boots to second grade. And I am the not-necessarily-proud owner of two size-11-wides. With flippers this big, my editor was sure all of the Fusco clan could swim.

We began our watery odyssey on my son's birthday. The day dawned. . . cloudy, with a chance of more clouds. We decided this was perfect water park weather (it never got too hot).

In fact, if you ask my son Andrew, everything turned out to be perfect. He and friend Kevin started out with chicken-hearted Grace and me on the Rambling Bayou (Adventure Island's version of the lazy river) and then ramped up the excitement a bit at Endless Surf (the wave pool). Grace and I spent most of our day enjoying these two attractions. With its waterfalls, misting sprays and shady, rainforest-like landscaping, the river was a big hit with Grace.

Andrew and Kevin moved on to the tube rides and mid-range waterslides, including the Calypso Coaster, the Runaway Rapids and the Wahoo Run.

Throughout the day, the boys gravitated to the base of the Gulf Scream, silently staring up at the steep, scary, high-velocity slide.

It was clearly a game of chicken, and just before we left the park, both Andrew and Kevin conquered their fears and descended, twice, proclaiming it "really, really fun." Just before we left, Andrew said, "This is one of the best days of my life!"

Tampa, with a major airport and quick access to I-4 and I-75 (two of Florida's main highways), is easy to reach but hard to leave. The city hosts some stellar family attractions including Busch Gardens Tampa Bay, adjacent to Adventure Island, and offering entertaining shows, exotic animals and thrill rides; ZooTampa at Lowry Park, which houses the only nonprofit manatee rehabilitation hospital in the world; The Florida Aquarium, focusing on Florida's marine environment from wetlands to coral reefs; and MOSI, the Museum of Science and Industry, with the only IMAX Dome Theatre in Florida. Just 30 minutes or so across Tampa Bay are the beautiful beaches of the St. Petersburg/Clearwater area.

Thrills, chills and relaxation: Volcano Bay promises them all. The Krakatau™ Aqua Coaster features four-person canoes that glide upward through the mists, exploring murky, twisting paths inside the volcano before emerging a heart-stopping plunge through a glistening waterfall. Waturi Beach invites you into a tropical paradise complete with surf, where you can swim, splash and kick back in the warm waves.

Rated the Nation's Best Outdoor Waterpark by USA Today, this waterpark holds bragging rights as the first water park in the world designated as a Certified Autism Center. Daredevils won’t want to miss the KareKare Curl, a high-adrenaline, weightless adventure ride that can best be described as a "curve shaped wave" which riders will experience when climbing the vertical wave wall. The fun isn’t all high-energy: sandy beaches tempt you to ditch your shoes, and the lazy river, Loggerhead Lane, features stunning underwater views of fish and Commerson's dolphins.

If you'll pardon the pun, there's something totally cool about a Florida water park that's designed to look like a ski resort. Here, waterslides are engineered to look like slush cascading down mountain toboggan runs; the "Summit Plummet" a chilling 120 feet of scream-inducing, vertical free-fall; and a chair lift carries swimmers to the top of Mount Gushmore. In typical Disney fashion, this magical "spin" adds both visual appeal and an element of fun to a park that would already have exceeded most guests' expectations.

Blizzard Beach is huge, and virtually packed with thrilling rides, including the Toboggan Racers where guests slide down face-first, as you would on a sled; Teamboat Springs, billed as one of the world's longest family raft ride; and Snow Stormers, toboggan-style mat slides.

With a very large wave pool, as well as two areas specifically designed for children (Tikes Peak for young children, with fountains and mini slides; and Ski Patrol, a pre-teen area with slides, bobbing "icebergs" to walk across and a fun rope drop into the water), Blizzard Beach has something to offer the whole family. That said, its forte is clearly rides that appeal to teens and other thrill-seekers.

Disney's Typhoon Lagoon offers everything you'd expect to find in a Florida water park, then takes it one step further. Along with plenty of sliding thrills, this attraction boasts one of the world's largest surfing lagoons {two-and-one-half-acres in size) with the biggest waves of any Florida water park (up to six feet high).

There's also Shark Reef, a saltwater reef environment where guests snorkel amidst fish, coral and plant life typically found in Caribbean waters. The water here is chilly, but the view is worth it. After all, when your child's essay entitled "What I Did On Summer Vacation" includes swimming with sharks (albeit docile nurse sharks), his status may rise instantly with classmates.

About 35 miles northwest of Tampa, you'll find Florida's only spring-fed water park gushing clear, cool, 72-degree water. This smallish-sized park is a nice add-on to the Weeki Wachee Springs State Park attraction that features the legendary Weeki Wachee mermaids. With a lazy river, the L'il Mates Caribbean Cove children's water play area, and four slides including the Pirates Plunge waterflume, it's sure to be a family-pleaser. And for every little girl who has ever seen The Little Mermaid and wished to meet a beautiful finned female, it's a can't-miss.

More Ways to Get Wet

In the Orlando/Kissimmee area and still looking for the ultimate splashdown? Check out these waterpark alternatives, which offer their own ways of getting wet:

Kids can cool off at Lilly's Pad in Gatorland. Safely separated from Alligator Island and the reptiles that reside there, Lilly's Pad is fun for tots with water jets and slides.

Not to be outdone by its theme park counterparts (or Discovery Cove across the street) SeaWorld Orlando devised its own ways to get you wet with Journey to Atlantis (based on the mythical underwater city, if that gives you any hint of how wet you'll get) and their own kiddie play area, Shamu's Happy Harbor. Of course, just sitting in the "splash area" during a Shamu show will do the trick.

Lest you think Florida's water attractions are only of the man-made variety, consider beautiful Crystal River in Citrus County, where visitors swim with manatees... Ichetucknee Springs State Park in Fort White, where you can swim, tube and snorkel in a freshwater river and spring... Big Cypress National Preserve between Miami and Naples, where adventurous souls may take a guided "swamp slosh" through a unique wetlands habitat... Ginnie Springs, a mecca in High Springs for divers from all over the globe... and Wakulla Springs, where several of the early Tarzan movies were filmed.

Sprinkled throughout the state and providing access to a huge variety of landscapes and wildlife, Florida's state parks, forests and other public lands are without compare. For more information, contact the State of Florida's Nature & Heritage Tourism Center in White Springs, to find out more about our natural water wonders, along with outfitters who can help you.

Well, no, it doesn't have waterslides... tube rides... a wave pool... lots of giggling teenagers... or really anything in common with most water parks. Other than water, that is. At Discovery Cove in Orlando, the emphasis is on personal, interactive experiences with marine creatures rather than high-velocity water thrills.

And, with approximately 1,000 guests admitted each day, there's plenty of "elbow room" to enjoy the surroundings. A one-price admission starting at $199 (prices change daily and seasonally) includes the dolphin swim, access to all park attractions, freshly prepared meals and beverages, snorkeling and beach gear, parking, and admission to either SeaWorld Orlando or Busch Gardens Tampa Bay for 14 consecutive days. Reservations are required.


Of Men and Mermaids

Known as "The City of Live Mermaids," the female finned inhabitants of Weeki Wachee Springs State Park have been entertaining visitors since 1947, and have even performed for the likes of Elvis Presley, Don Knotts and Esther Williams (an aquatic goddess in her own right, tail or no)

The spectacle takes place in the unique Mermaid Theater, 16 feet below the surface of the spring. Shows such as the "Underwater Spectacular" and the Hans Christian Andersen-inspired "The Little Mermaid" include musical numbers and mer-maids actually eating and drinking underwater. What may be most impressive, however, is their ability to hold their breath for minutes at a time.