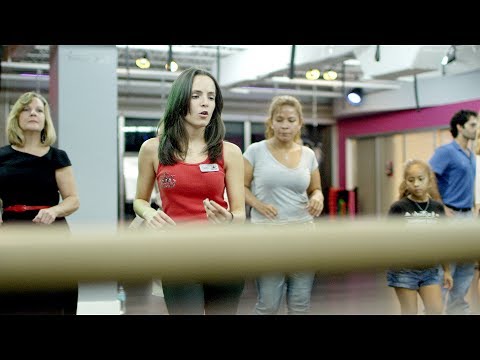 The bass reverberates. The music pulses through the walls. The floor. The furniture. Ice cubes dance in glasses on tables. The singer’s voice blasts from the speakers: “Me hiciste brujeria.”

It means, “you put a spell on me.” And, looking around Tucandela Bar at the stroke of midnight on a Friday night, it seems to be true.

Tightly packed dancers crowded on the dance floor sway and step in an individual unison – they keep rhythm together, but each has his or her own unique moves. So do the waitresses as they glide through the room holding brightly glowing ice buckets high. The buckets are clear, lit from within. It gives them a supernatural glow – artic starlight in a bucket.

People sitting at the tables nearby shimmy their shoulders and bob their heads to the beat. Others standing along the bar mark time with their feet, dancing in place. So do the bartenders.

Everyone, it seems, is under the music’s spell. And, said DJ Andres Ferro, that’s what he’s aiming for.

“I read the reaction of the people, and play the music that builds on their emotions,” he said. “When the DJ does it right, they can’t help it. They have to dance. It is magic. That’s precisely what it is.”

As he finished twirling his girlfriend at the edge of the dance floor, Christian Insignares agreed.

"They have good transitions, and keep things moving,” he said. “Some clubs, they have Latin music, then switch to rock. It doesn’t make sense.”

Not here. Here, it’s reggaeton and salsa, bachata and cumbia – all Latin music. All night. But not just Spanish. There’s Pitbull, too, singing “No pare la fi-es-TA! Don’t stop the par-TY!”

Which doesn’t seem like much of a possibility at the moment. People are jumping up and down to the beat, throwing their hands up in the air. And, as Tucandela manager Pedro Osorio said, at midnight, “It’s only just starting.”

Tucandela is actually two clubs in one. It’s a spinoff of its downstairs neighbor in Miami’s Mary Brickell Village, Baru. Both began in Bogota, Colombia, then spread to Panama. Then Miami.

Loosely translated, Tucandela means “your flame,” and it’s definitely hot. The interior is lined with rough-hewn brick. It’s compact, with connecting corners and crannies offering several conjoined, yet separate, spaces, all spilling away from the main, circular dance floor. The DJ sits at an elevated podium overlooking the main room, where he can watch the crowd and gauge his selections accordingly. It’s all darkly lit in a reddish glow, giving the place the feel of a rustic rave with a Latin flair, a fiesta in the firelight.

“We’ve been to other Baru bars,” said Tomas Dominguez, who is weaving with a group of friends celebrating a birthday, “but this is great. The atmosphere. The women. The music. It’s a pretty nice place to drink and have a good time.”

El Patio is exactly what its name says – an outdoor dance, drink, mingle and taste space, draped in lush greenery and decorated with “trash” from Colombia, according to one of its co-owners – doors, windows and an eclectic mix of outdoor furniture – and a bar made of stacked cordwood.

The goal? To look like a Colombian grandmother’s patio. But this grandma is cool. DJs and live music bands provide the sounds, ranging from reggae and salsa to old-school Latin and “electropico,” described as "vintage salsa mixed with electronic music."

Live acts have included Xperimento, Bachaco, and the Latin alt-rock band Atajos, which released its latest album and music video at the club. Food offerings include chorizos a la parilla, wings and the El Patio burger with swiss cheese. Craft beers include a seasonal selection of locally produced Wynwood Brewery brews.

The Afro-Cuban band PALO! gets the crowd dancing at Ball & Chain in Little Havana.

Before Little Havana, the Miami neighborhood now internationally famous for its Cuban-ity was known as Riverside, and the bar now known as Ball and Chain was a favorite late-night locale for many of the world’s most famous jazz musicians, including Louis Armstrong, Billie Holiday, Count Basie, and Chet Baker.

It also had a notoriously shady – okay, criminal – reputation as an illegal gambling den. Then came Castro, Cuban exiles, and the famous transformation that made Miami the de facto capital of Latin America.

What was missing, the club’s new owners decided, was a true Cuban “pachanga” with DJs and live music bands including three-time Grammy noms Tiempo Libre providing true Latin salsa and jazz. Well, that, and a 3,000-square-foot main room with vaulted Dade County Pine ceilings and an outdoor oasis with a true-to-life band shell shaped like a pineapple.

As the name said, this is “Today like yesterday,” a step back in time – at least musically. This pocket-sized Little Havana club is compact and cozy, but big on delivering the best sounds of real Cuban music.

Any given night will find icons such as Albita and Malena Burke, and newer acts like the Spam Allstars and Amaury Gutierrez following in the island’s musical traditions.

It’s a nostalgic journey for true music lovers, where patrons sit – or dance – within arm’s reach of the performers and it’s not surprising for celebrities such as Pitbull, Shakira or Marc Anthony to wander in for a show.

Menu items based on typical Cuban dishes of roast pork, tamales and chicharrones (fried pork rinds) have musical names like Bolero, Mambo and Guaguanco. There’s a full bar and bottle service. Come early to make sure you get a seat; stay late to truly enjoy the place. You never know who will walk in and join in the jam, or when.

Like Hoy Como Ayer, this one has been around – surprisingly for Miami – for years. Maybe because it is so darn excellent. The list of stars and superstars who have performed at La Covacha make it sort of a modern-day Fillmore for Latin music.

For starters. It is truly unparalleled as a place for the best live Latin music, and a full-bore, all-out Latin fiesta venue. Whether you’re taking part or just admiring the exceptional whirling displays of rumba, cumbia and salsa on the dance floor – and the oh so beautiful people doing it – La Covacha is a must-visit for lovers of dance. Doors open at 10. The party goes until 4.