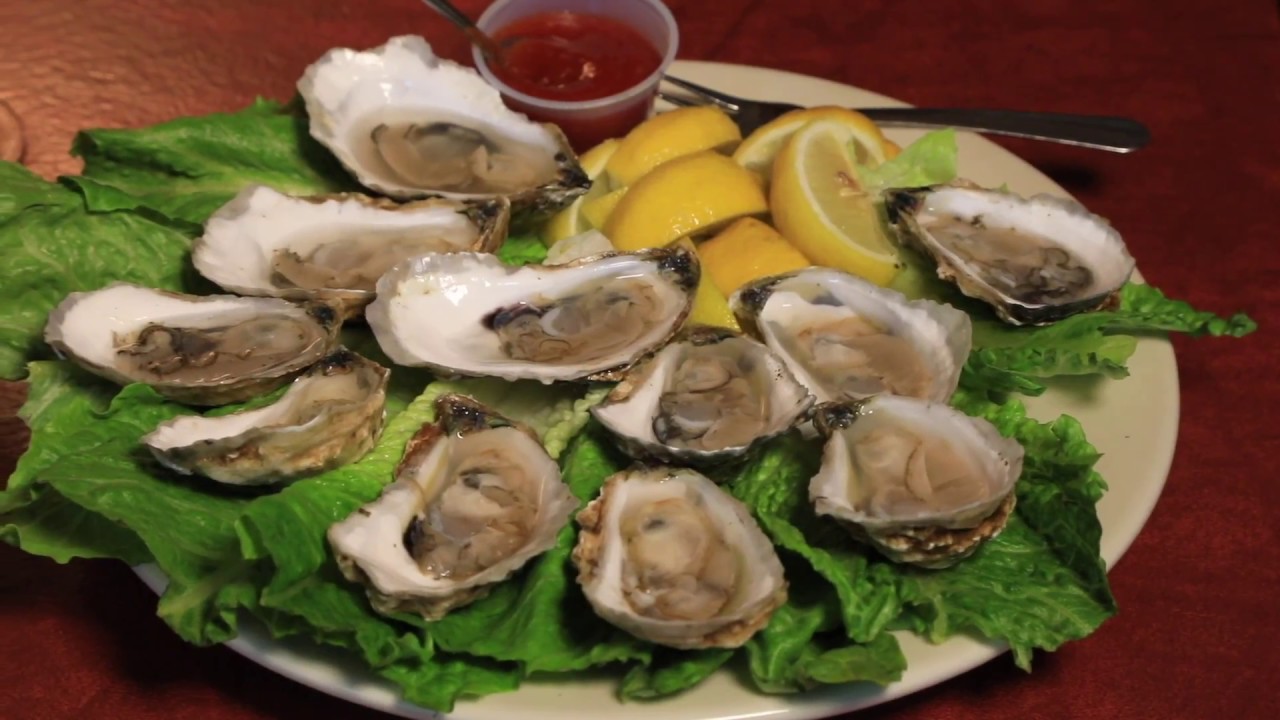 The Oyster Culture in Florida is Strong … and Delicious

Oysters are having a moment. They are trendy (think wedding reception oyster shooters swimming in Bloody Mary mix). They are everywhere (pop-up raw bars are a thing). Heck, they are even sexy (their reputation as aphrodisiacs is legend).

I had my first moment with oysters au naturel at Bunky’s Raw Bar on Florida’s Space Coast back in the 1980s, a few years before I made the Sunshine State my home. (That new taste treat and the Cuban sandwich might have cemented my decision to move east from California.) I have been eating raw oysters ever since, sampling them at every restaurant I frequent that sports them on the menu. Always a dozen, shucked on ice.  Market price? Bring it on. I love them that much.

Since that love-at-first-slurp visit, Bunky’s has moved south down A1A from Satellite Beach to Indialantic but still deals our oysters out ice cold, serving them from the Gulf of Mexico, the Pacific Northwest and Long Island Sound.

There are many places in Florida where you can partake in raw bar culture, from waterside fish shacks to posh restaurants that pop French Champagne with them if you so desire. I like mine with a Florida craft brew, such as Crooked Can’s Cloud Chaser hefeweizen. The Winter Garden brewery is just one of dozens that have sprung up around the state in recent years, and it’s almost a given that where there are oysters on the half shell, there is craft brew on the drink menu.

Eating raw oysters for the first time is a leap of faith. There they are on the shell, sort of jiggly with a pool of liquor (never say liquid) cradling the slippery devils. French poet Leon-Paul Fargue described eating oysters “like kissing the sea on the lips.” I would concur; they are all at once salty and delicate, two things that seemingly don’t go together. And yet they do, perfectly. Like a good kiss.

That first time, I jimmied the oyster from the shell with a little fork and maneuvered it onto a saltine cracker. On top of that went a squirt of cocktail sauce and then a bit of horseradish. The oysters had already been baptized with fresh lemon juice. I still eat them this way but I always slurp one naked first, just to taste for freshness and to experience that salty smooch from the sea. If the restaurant serves an assortment from around the country, I eat each one with lemon only to compare tastes. And they do each have their own characteristics. The Kumamoto of the Pacific Northwest is small and sweet. The Blue Points and Wellfleets of the Northeast are brinier and more savory than sweet with a slight mineral taste. Anchor Bay oysters from Washington state pack a seaweed finish. When you see wild Apalachicola oysters on the menu, order them. They are becoming harder to find.

Florida is famous for wild-caught Apalachicola oysters but the industry has fallen on hard times in recent years for environmental and political reasons. About 95 percent of the oysters we eat now are farm raised rather than wild-caught. Panacea Oyster Co-op in Wakulla County is one such Gulf coast company. About 30 Panacea oyster wranglers are cultivating oysters that are being served in various Northwest Florida restaurants, mostly in Tallahassee.

Even though I like oysters plain, I still crave the punch of sinus-clearing horseradish. But suit yourself and slurp them from the shell all by their lonesome or even draped with a classic mignonette, a red wine vinegar and shallot mixture spiked with cracked black pepper. I have even eaten them covered in Buffalo sauce topped with blue cheese crumbles. But at that point, you could be eating anything, the accouterments out-muscling the subtle oyster.

For the raw-averse or simply for those who want to eat them cooked, the popular oysters Rockefeller might be the way to go. There are variations on the recipe, but the basic idea here is that oysters on the half shell are topped with onion and spinach that have been sautéed in butter then sprinkled with grated Romano cheese and baked. Chargrilled oysters, hot items at many New Orleans’ French Quarter restaurants, are also standard in Florida. The oysters are deliciously drenched in melted butter spiked with garlic then topped with grated Parmesan and grilled. Don’t be shy about asking for more French bread to sop up that heavenly liquid. Fried oysters are also common, often stuffed into a baguette, the po’ boy way, or served in baskets with fries and cole slaw.

You can find oysters on the menu wherever you travel in Florida, especially in towns along the Gulf coast and Atlantic Ocean (and that’s a lot of places!). It’s noteworthy when the restaurateurs celebrate their oysters’ origins but not knowing the provenance doesn’t slow me down. I let my taste buds guide me, whether I am eating Prince Edward Island bivalve mollusks or farmed-raised Pelican Reef oysters from Cedar Key. Here are some of the places in Florida where I have enjoyed oysters.

Monty’s Raw Bar, Coconut Grove.  There’s a Key West vibe to this lively joint on Biscayne Bay, mere miles from downtown Miami. It’s definitely a sandals-and-shorts-under-the-tiki-hut sort of place, but that doesn’t mean you aren’t in the lap of luxury. There’s a Ritz-Carlton close by and the big yachts bobbing at the marina show you how the 1 percent set sail. We visited on a hot, hot July day but the breeze off the water brought some relief. A dozen ice-cold oysters on the half-shell were downed in no time. And then another. They were that good. The applewood-smoked mahi mahi fish spread was a great accompaniment as was the Floridian hefeweisen beer from Funky Buddha in Oakland Park, just up the coast.

A plate of "Dirty Oysters," a delight prepared with sour cream and red and black caviar, are offered at the Riverwalk Cafe and Oyster Bar in Stuart.

Riverwalk Café & Oyster Bar, Stuart. Chef/owner Steve Feder dishes out some fine food in the restaurant housed in an historic 1922 building, including Dirty Oysters (sometimes called Oysters Romanoff) topped with sour cream and caviar. The seafood isn’t all local but it’s lovingly prepared and if you visit when the corn chowder is on the menu, get it. Feder often serves oysters from Northeast U.S. and Canadian waters and his wait staff is happy to tell you where that day’s offerings are from.

Bunky’s Raw Bar and Seafood Grille, Indialantic. The previously mentioned Bunky’s beckons diners to “Come Get Shucked!” There is no lack of salty word play among oyster-mongers. Raw, fried, grilled and Rockefellered oysters are on the menu and Bunky’s brings in the shellfish from the Gulf of Mexico, the Pacific Northwest and the Northeast, mostly Long Island Sound. If you’re at Kennedy Space Center in Cape Canaveral, head south on A1A after your visit and get a dozen raw at Bunky’s. Think of me, especially if it’s your first time.

Phillippi Creek Village Restaurant & Oyster Bar, Sarasota. It’s picnic table couture out on the wooden deck overlooking the creek. That’s where I would recommend you sit if the weather isn’t too wilting. There’s tons of indoor seating with ice-cold air if you’d rather. I don’t need to tell you that I ordered a dozen raw but then we splurged for an order of seafood-stuffed oysters, too. Those are baked topped with a mixture of breadcrumbs, bay scallops and crab. Oyster nachos, Buffaloed oysters and oysters Rockefeller are also among the appetizers. Get a dozen steamed or fried in a sandwich. The Cajun seafood gumbo is a bowl of spicy heaven.

Veronica Fish & Oyster, Sarasota. Veronica is the fancy yin to Phillippi Creek’s Floridian yang. The classy corner restaurant is south of Sarasota’s vibrant downtown and not far from Siesta Key, where the beach there was recently named No. 1 in the country. Forget all of that for the evening while you put on your cutest strappy sandals and Lily Pulitzer sundress (he can wear a guayabera shirt and slacks) for a sophisticated night at Veronica. Chef Mark Majorie has fashioned a wide-ranging menu that features seafood in many ways. Of course, there are the raw oysters that he flies in from around the country. Your server can give you the run-down of that day’s selection. And then there are the decadent seafood towers with oysters, smoked fish and Dungeness crab. Go bigger and add shrimp cocktail, ceviche and poke. We vowed to have a fried oyster muffaletta sandwich next time we are in Sarasota. Oh, and we will be back. Word to the wise: Make a reservation.

Oyster Bar, St. Petersburg. We have eaten ourselves silly at this downtown restaurant that celebrates the oyster in many ways. On a recent visit we got a “shucker sampler,” which included Apalachicola oysters plus West Coast and Northeast specimens. Then we ordered a baked oyster sampler that included three each of Rockefeller, Parmesan herb-crusted, and three-cheese jalapeno and chipotle aioli. It’s hardly embarrassing to say that we then ordered a dozen Apalachicola oysters deep-fried with a Cajun buttermilk dipping sauce. On a Thursday night, the block was humming but we were comfortable in our banquette surrounded by exposed brick walls and in the company of a couple of amazing shuckers who took great care separating the delicate meat from the shell.

Boss Oyster, Apalachicola. There are dozens of places to eat oysters on the Gulf of Mexico Coast in Northwest Florida, including “proud dive” Lynn’s Quality Oysters in Eastpoint and Up the Creek Raw Bar in Apalachicola, both on my oyster bucket list. Also on my Panhandle oyster wish list is the pearl of State Road 30A, the Hurricane Oyster Bar & Grill in Grayton Beach, which only takes cash and checks. But Boss Oyster on the river in Apalachicola is the boss. You are not likely to be able to think of a topping for oysters that the culinary minds here haven’t already put on the menu. Blue crab, artichoke, Jack cheese. Bacon, jalapeno, Colby cheese, hot sauce. Garlic, feta cheese, olives. Bacon, Worcestershire, hot sauce. Get them raw. Get them cooked. Have them in a sandwich. Trust me. It’s a lot. Boss is one of Florida’s most famous restaurants and that makes it worth a stop.

Indian Pass Raw Bar, Port St. Joe.  The sign on the wooden building is so weathered you might think this place closed long ago. The cars and motorcycles outside and the crowd inside tell a different tale. I visited the Indian Pass Raw Bar years ago for a story on the state’s best gumbo and got a side of funky local history. The menu claims the oysters “slept in the bay last night” and I am not sure I buy that, but I will buy a dozen raw oysters at eat them at the counter. Port St. Joe is but a hop and a skip west of Apalachicola so oyster tradition runs deep here.

There are many more places in Florida to create your own oyster moment. Raw bars existed long before they became trendy and will still be around when the cool kids look elsewhere for their culinary kicks. I intend to enjoy dozens more, 12 on the half shell at a time.