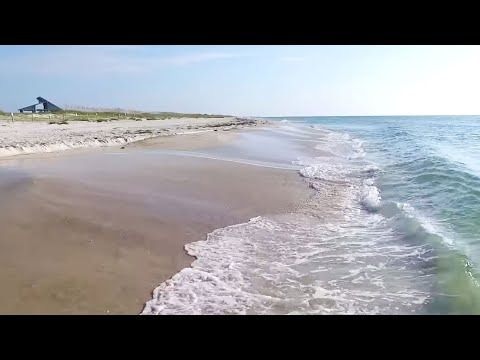 
Sitting on the beach at Gap Point, overlooking Apalachicola Bay, I watch as the sun sinks low on the horizon. Off in the distance, a motor boat drones; above me, the autumn wind whistles through the pine trees.

Time seems to stand still here in this little piece of paradise. When you see St. George Island, you'll understand.

Twenty yards from shore, a school of baitfish moves through the shallows. Not far behind, spotted sea trout swirl as they pick off stray fingerlings one by one. Then, without warning, the water explodes as an osprey pounces on an unsuspecting trout. As this raptor flies off with the fish firmly grasped in its talons, a second bird of prey, an eagle, swoops in from above and tries to steal the osprey’s catch.

The eagle and osprey dance above the water for a minute. Then, a second osprey arrives and chases off the eagle. The birds fly off. Down below, the trout kept feeding. And I sit back in my beach chair and feel for a moment like the luckiest man on earth.

But that is the beauty of this state park, officially called the Dr. Julian G. Bruce St. George Island State Park. It is located at the east end of an island that many folks know only as a quiet weekend retreat on the Gulf of Mexico. The 2,023 acres of undeveloped land offer nine miles of deserted beaches just waiting to be explored. It is nature so special that it attracts wildlife watchers from all across the country, and abroad.

St. George Island has been a favorite rest and recreation spot for humans for more than 5,000 years. Archaeologists estimate that pre-Columbian natives regularly visited to feast on the oysters that are so plentiful in Apalachicola Bay. Pottery shards, stone tools and weapons have been found throughout the park. While native shell middens in the park cannot be seen either because they have grown over with brush or have been lost to storms, the visitor center has a display case of a few artifacts found by park rangers.

Florida’s early settlers came for the slash pines, which they tapped for turpentine. Many of the “turpentined” pine trees in the park can be seen; visitors look for “cat faces” or hacking grooves made by axes that are seen on many island tree trunks.

During World War II, American G.I.s at nearby Camp Gordon Johnston (then called Camp Carrabelle) trained in these sand dunes to prepare for the invasion of Europe. Rangers point out that shell casings can sometimes be found washed up on the beach. Lucky park rangers have even found dummy bombs filled with pea gravel on the beach, apparently dropped during training. (Not to worry, the ones found have all been rusty.)

After the construction of a causeway to the island in 1965, its popularity grew, and beach cottages took over the western part of the island. Since 1980, the eastern end of the barrier island has been part of the Florida Park Service. Route 300 (which runs off Route 98 to the island over a new bridge, the state’s fourth longest) cuts through the center of half of the park, offering drivers access to the East Slough and Sugar Hill beach areas and the state park’s full-service campground.

If you are looking for solitude, park your car at Sugar Hill beach and head northeast along the Gulf of Mexico to the island’s east end. Bring plenty of food and water; the walk is five miles each way. After an hour or so, stop and take a look in either direction. Chances are there won’t be another human for as far as the eye can see, aside from the occasional fisherman.

You’ll need a good, thorough bird book. During my visit to see St. George Island, neo-tropical migrant birds were heading south for their winter haunts in Central and South America and had begun to arrive in good numbers. After watching the battle between the bald eagle and the two ospreys, I hiked along a one-mile nature trail that skirts the edge of East Slough and watched another cool-weather visitor circle above the coastal scrub. It was a marsh hawk, in search of what I thought were mice.

Gap Point is home to a primitive campsite. Campers have two options: backpack in from the Sugar Hill camping area or paddle a canoe or kayak across a short stretch of open water from the boat ramp that you’ll find just past the visitor’s center. The primitive camp has no potable water, so you must carry what you plan to drink. There is a fire campfire ring; firewood is sold in the Sugar Hill campsite.

The park has two boat ramps, but don’t try launching anything larger than 21 feet. The surrounding waters can be tricky and a shallow draft vessel is recommended, especially if you want to fish the grass flats for flounder, redfish and trout. Anglers can also fish from the beach. Surfcasters will catch Spanish mackerel during the fall and spring, as well as the occasional cobia and pompano, some of Florida’s most highly prized sport fish. (Check with the Florida’s Fish & Wildlife Conservation Commission at www.myfwc.com for the most current regulations.)

You won’t find a coastal state park in Florida better suited for kayaking and canoeing. Both types of watercraft are available for rent within the park or feel free to bring your own. The bay side of the island offers the most sheltered paddling, but you can explore the Gulf beaches on days when the seas are calm.

Just to the west of St. George Island is the St. Vincent National Wildlife Refuge. This 12,490-acre barrier island is only accessible by boat, but its remoteness helps maintain the island’s pristine state.

Established in 1968 to provide a safe, secure resting place for migrating birds, it has done much more than that; today the refuge has become one of the most popular birding spots in the eastern United States. The refuge is close enough to shore to visit by kayak, but visitors can also arrange for private transportation. (The Apalachicola Chamber of Commerce keeps a list of providers.)

Hikers can explore the island on foot via a series of sand roads that follow the natural dune ridges, evidence of the fluctuating sea levels of millennia past. In between the dunes, you will find a variety of habitats, from freshwater ponds to upland pine forests. While hiking, don’t be startled if you see St. George Island's large, strange-looking hoofed animals in the marshes. These 500-pound animals are sambar deer, an elk-like animal from Southeast Asia, introduced years ago when the land was still a private hunting preserve. (Yes, there were zebras too.)

St. Vincent also has the unique honor of being one of the few places in the Southeast where red wolves are being bred for re-introduction into the wild. After the pups are weaned, they are released in a refuge in North Carolina where predators once existed in large numbers.

St. Vincent is a popular destination for hunters, so be sure to check the most current regulations before planning your trip.